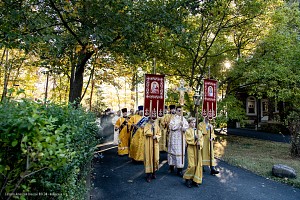 Concelebrating at Liturgy with the First Hierarch of the Russian Church Abroad in the convent’s St. Seraphim Cathedral were Archbishop Gabriel of Montreal & Canada, Eastern American Diocesan vicar Bishop Nicholas of Manhattan, and a multitude of clergy:

Singing at the service was a mixed choir under the direction of conductor John Arlievsky.

Prior to the start of Liturgy, His Eminence ordained Reader Ilya Mouravieff (cleric of Holy Trinity Church in Vineland, NJ) a subdeacon, and awarded St. Seraphim Cathedral altar servers Andrew Fedorowski and Peter Galitzine the right to wear the orarion.

The church was full of worshippers, who came from various states to celebrate the convent’s anniversary. Most of these communed of Christ’s Holy Mysteries.

After the Great Entrance, His Eminence ordained Deacon Andrew Podymow a priest.

Upon completion of Liturgy, Metropolitan Hilarion congratulated the clergy, Abbess Makaria, and the nuns of the convent on the occasion of their anniversary. He recalled the labors of the convent’s founder, Archbishop Andrew (Rymarenko) of Rockland, in organizing the monastic life therein, and wished the nuns God’s aid in their further labors and service of prayer.

During the celebrations, the lesser church, home to an icon of Venerable Seraphim of Sarov that began as a portrait of the saint painted during his lifetime, was opened for the faithful, who were able to pray before it to the saint.

At the festal luncheon, a slideshow of old photographs was presented about the history of the convent and the people associated with it. The film was organized by regular convent parishioner Valentina Butch, who spent her childhood in the immediate vicinity of the convent. 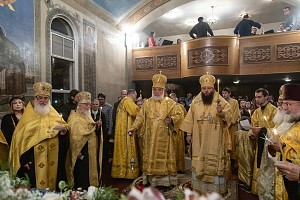