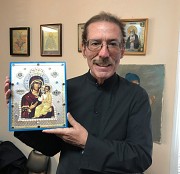 On Sunday October 27, after a lengthy battle with cancer, Reader Michael McKenney (Dr. William McKenney) reposed in the Lord. He was 63 years old. Reader Michael taught business at Eastern Kentucky University, the University of Mississippi, and at Bethel University in Tennessee.

In 2012, he was elevated to division head for business and the Master’s in Business Administration program at the Martin Methodist College in Pulaski, TN. Reader Michael was a long-standing member of St. Xenia Mission in Huntsville, AL and was tonsured reader in 2016 by Metropolitan Hilarion of Eastern America & New York. Reader Michael served the St. Xenia community as a tonsured reader with diligence, piety, and humility.

The funeral will be held on Friday, November 1, at 10:30 AM at St. Athanasius Church OCA in Nicholasville, KY (100 Lime Lane) with visitation beginning at 9:00 AM. The burial will be held at Richmond Cemetery (606 East Main Street, Richmond, KY), followed by memorial repast at White Oak Pond Church immediately after (1238 Barnes Mill Road, Richmond).

Diocesan clergy are asked to include the newly reposed Reader Michael in memorial services. May his memory be eternal!