On Wednesday, November 6, the patronal feast day of Holy Virgin "Joy of All Who Sorrow" Diocesan Cathedral in San Francisco, CA, in accordance with the resolution of the Council of Bishops of the Russian Orthodox Church Outside of Russia, confirmed by the Holy Synod of the Russian Orthodox Church, His Eminence Kyrill, Archbishop of San Francisco & Western America, led the consecration of Archimandrite James (Corazza) as Bishop of Sonora, second vicar of the Western American Diocese.

The divine servics were held under the aegis of the myrrh-streaming Hawaiian Iveron Icon of the Mother of God. The hierarchal choir sang under the direction of Vladimir Krassovsky.

Upon conclusion of the service, Archbishop Kyrill presented Bishop James with the archpastoral staff, offering the new bishop words of guidance.

After the kissing of the cross, the Russian Center in San Francisco hosted a reception, where many congratulatory messages were delivered to the newly consecrated Bishop James. 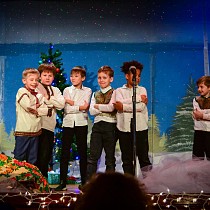