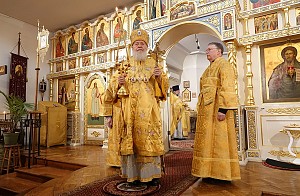 Singing the service was the Synodal Choir under the direction of Matushka Eugenia Temidis.

A multitude of parishioners came to pray at Liturgy, most of whom communed of Christ’s Holy Mysteries.

Upon conclusion of Liturgy, Metropolitan Hilarion addressed those gathered with a sermon on the topic of the day’s Gospel reading, as well as on the life of the holy ascetic, Venerable Joannicius the Great, who lived during the second half of the 9th and first half of the 10th centuries, whose memory the Church celebrates on November 17. It was he who composed the words of the prayer said during the evening prayer rule "My hope is the Father, my refuge is the Son, my protection is the Holy Spirit: O Holy Trinity, glory to Thee."

After Liturgy, the traditional luncheon was prepared by the sisterhood for the clergy and parishioners in the cathedral hall. 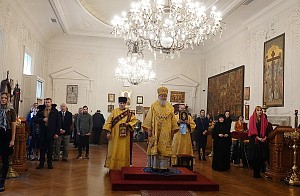