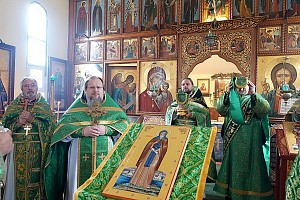 Abbot Tikhon (Gayfudinov), rector of the skete, said that when the decision was made to transfer the defunct parish into a monastic community, Metropolitan Hilarion proposed choosing a Heavenly patron for the skete brotherhood, just as was done in Jordanville, where the brethren chose Venerable Job of Pochaev as their patron. After prayerful deliberation, it was decided to name the brotherhood after Venerable Barlaam of Khutyn – a saint who lived in 11th century.

Upon conclusion of Liturgy, Fr. Tikhon thanked the clergy for coming to the skete to pray and share in the joy of the feast. He spoke about the Heavenly patron of the brotherhood, saying, in part:

"Venerable Barlaam lived before Venerable Sergius of Radonezh and Seraphim of Sarov and many other saints whom we revere. He was one of the pioneers who consecrated the Russian land with his deeds and prayers.

"The venerable saint lived in the land of Novgorod and was the son of rich, faithful parents who did not, however, see their son as a spiritual man, but as an employee at their rich and princely home. But St. Barlaam left home and went to the most far-off and miserable place you could imagine. The area was even referred to in Russian as "hutyn," meaning ‘ill, bad, or poor.’ There was a pagan temple there.

"The saint did not have a cell; he slept in a dense forest on the ground, under the open sky, was exhausted by cold, and in summer by heat. But with his prayer, with his good deeds, he sanctified this place, and now there is a wonderful monastery where the monks, our brothers in Christ, labor. And we pray to the venerable one and ask him to help us be saved, instructed by his wise guidance."

A fraternal meal was held in the monastery refectory, during which those present were able to share spiritual conversation. 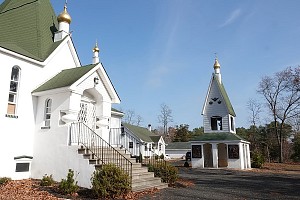