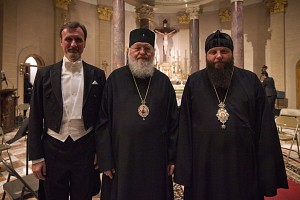 On Wednesday, October 30, the first concert in a series titled "Breaking Boundaries" was performed masterfully at St. John Nepomucene Catholic Church in Manhattan, New York, by the Capital Symphony Orchestra, under the direction of Vladimir Gorbik. The hall repeatedly erupted in applause, and the Americans in the audience expressed their particular gratitude at hearing the music of Pyotr Ilyich Tchaikovsky.

This one-of-a-kind project, initiated by the renowned Russian conductor Vladimir Gorbik, affirmed the natural friendship between American and Russian composers and performers. The concert’s primary mission was directed at shoring up collaboration between our two nations, and it was carried out in a venue where people pray for the continuation of peace on Earth.

The evening’s program began with the piece "Within Her Arms" by American composer Anna Clyne, who dedicated it to the memory of her late mother. The remarkably delicate orchestral music, which relays its own manner of grief for the departed and summons a whole palette of feelings, from the bitter experience of the death of a loved one to, if one could say this of instrumental music, prayerful feelings for the repose of the soul. In some ways, the score’s imagery echoes the aesthetic of Arvo Pärt. Every instrument was given its own individual voice. At first, the hall was silent at the conclusion of this music – which touches the most hidden strings of the soul, and which was so exquisitely performed by the Capital Symphony Orchestra – remaining captivated by what they had just heard. Then they literally exploded in applause!

No less of an impression was made by the participation in the concert of Bulgarian pianist Tania Stavreva. Born in Bulgaria and currently living in New York, today she is one of the ten best young pianists on the North American continent. Tania is an incredible virtuoso and professional at her craft. Vladimir Gorbik, presenting this pianist to the public as part of the "Breaking Boundaries" project, asked her to first perform a solo piece, so that she might demonstrate her own incredible technical abilities. Her phenomenal interpretation of Alexander Vladigerov’s "Variations" on the Bulgarian folk song "Dilmano, Dilbero" for solo piano stood out for its meticulous and refined nuance and detail.

An exclusive facet of the concert was the world premiere of Adelphi University Professor Dr. Nicholas Reeves’ "Concertino Campane," written by him specially for this concert. In each part of this remarkable composition, it was easy to perceive the imitation of the peal of bells of both the Moscow Kremlin and Prague. Dr. Reeves gathered a wealth of media and historical information in his research on the art of bell ringing. The piano also plays a key role here in the orchestra, because, by its nature, with the clusters and strings of its passages it conveys the resounding vibration of the bells. The Orchestra sounded extraordinarily colorful, creating an effective atmosphere of joyful excitement at the sound of bells pealing. Vladimir Gorbik was able to capture all of the ideas instilled by the author in the music of this composition. After the concert, Dr. Reeves noted that this was an exceptionally powerful interpretation!

Ending the program, as if to offer it a concluding word, was one of Pyotr Ilyich Tchaikovsky’s intimate compositions, "Serenade for Strings." The exceptional lightness, delicacy, and breadth of its sound, and the inspiration shown by the musicians of the Capital Symphony Orchestra inspired the audience in turn. This composition is, figuratively speaking, the revelation of the Russian soul in Manhattan, the very center of American civilization, attesting to the Russian people’s desire to live in peace and accord with peoples of other nations, regardless of nationality or borders. Hence the title of the concert series: "Breaking Boundaries."

The renowned journalist and musicologist James A. Altena of Fanfare Magazine attended the concert and was completely delighted:

"Your interpretation of P.I. Tchaikovsky’s ‘Serenade for Strings’ was superb, and I doubt that I will hear a better performance of it in my life! You have achieved a very warm, rich sound, and at the same time an amazing clarity of all of the instrumental lines, which were ideally balanced and demonstrated a wonderful palette of dynamic shades. The depth of feeling was expressed in the sound of the Capital Symphony Orchestra, in a manner that was not excessively romanticized or overly sentimental, but rather was performed in strict conformity with the composer’s musical form and intent."

Several distinguished guests were in attendance at the concert: Metropolitan Hilarion, First Hierarch of the Russian Orthodox Church Outside of Russia; Bishop Nicholas of Manhattan; Co-founder and Chairman of the Board of Directors of the Patriarch Tikhon Russian-American Music (PaTRAM) Institute and head supervisor, Alexis Lukianov and his wife, Katherine Lukianov, also a co-founder of this educational institution; and Tatiana Zacharin-Geringer, Head Scoutmaster of the St. George Pathfinders of America. They all expressed their profound gratitude for being included in the program of a concert featuring music of the great Pyotr Ilyich Tchaikovsky. They also expressed their hope that the Capital Symphony Orchestra would continue to offer Russian orchestral music with its close and deep ties with the spiritual music of Holy Russia, as often as possible in America.

The father of the idea behind the “Breaking Boundaries” concert, Vladimir Gorbik, proved that music truly has no boundaries, and will find in any venue a warm reception in the hearts and souls of people from every culture. The concert became a brilliant confirmation of this fact. Maestro Gorbik noted this in our interview:

"Now as never before, collaboration between nations must be maintained. I think that we are on the cusp of a whirlwind of powerful and positive developments in the relationship between our peoples. If people can speak a single cultural language unhindered – and, after all, the language of music is one of these – then the development of Russian-American cooperation in the spirit of friendship and accord will strengthen peace. Such an approach is simply necessary in our times." 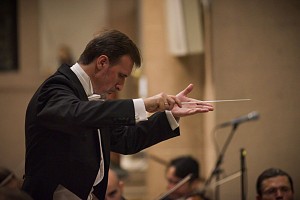