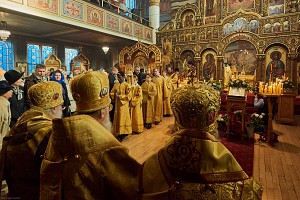 On Saturday, November 23, Metropolitan Hilarion of Eastern America & New York, First Hierarch of the Russian Church Abroad, led the festal All-Night Vigil, co-served by Archbishop Gabriel of Montreal & Canada and Bishop Luke of Syracuse, as well as numerous clergy from all ends of the Canadian Diocese and guests from the Eastern American Diocese.

The parish choir sang joyously and prayerfully under the direction of George A. Skok. Joining the choir were singers from Montreal and other parishes of the Canadian Diocese.

Upon conclusion of the service, Metropolitan Hilarion presented the five oldest parishioners of Holy Trinity Church with the Synodal Order of the Kursk Root Icon of the Mother of God. The highest award was given to the last of the surviving founders of the church and the teacher of the parish school, Vasily P. Malikov, the longtime psalmist Olga F. Pechnikova, parish treasurer Maria N. Blagoveshchenskaya, parish choir conductor George Skok (directing the choir since 16 years of age), longtime head sister Maria Y. Slinko, longtime former parish warden Alexandra Y. Furlani. Diocesan gramotas for zealous work for the benefit of the Church were issued to parishioners who were the most distinguished in this field.