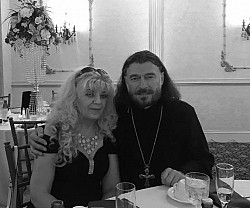 Matushka Slavica (née Žikič) married Fr. Ljubo in 1984. They had one son, Alexander. The following year, Fr. Ljubo was ordained a deacon and priest, and since 1987 has served as rector in Vineland. There, Matushka Slavica earned the love and respect of the faithful.

Matushka’s funeral and burial will take place in Serbia. The faithful are asked to keep her in their prayers.

Memory Eternal to the newly reposed handmaid of God Slavica!