"Sam Cox set out to make a Documentary about a Monastery in West Virginia. He wound up Converting." 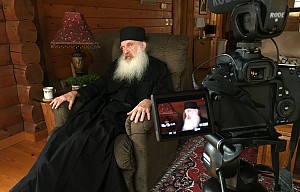 In theory, the idea of parting with your iPhone and moving to a remote hamlet to tend bees and experience spiritual fervor is an appealing one, especially in 2019. In practice, the actual requirements of [monasticism] – dying to oneself and leaving behind sex, substances, and careers – is a commitment that has always been radical, regardless of the century it takes place in.

It’s a choice that captured the attention of the filmmaker Sam Cox when he learned of the existence of a Russian Orthodox monastery tucked away in a remote holler of West Virginia. Cox, who grew up Pentecostal in Raleigh, NC, had left organized religion behind after college, feeling that it didn’t address contemporary "tensions."

His winding spiritual journey – through competitive professional years in New York City, a psychologically grueling stint at a farm outside Pittsburgh, and a move back to his hometown – led him, in 2017, to the All Saints Antiochian Orthodox Church in Raleigh. There, he learned of the Holy Cross Hermitage in Wayne, West Virginia, where some twenty monks live and work, having committed to a life of prayerful asceticism until death.

After receiving permission from Archimandrite Seraphim (Voepel), the head abbot at the monastery, Cox made numerous trips to West Virginia between 2017 and 2019. With unprecedented access, he chronicled the story of Father Justin, a new monk preparing for the tonsuring ceremony, in which he would take his final vows.

The result is "New Men," a 49-minute documentary that Cox directed, produced, and edited. Watching the monks gather eggs, mend fences, and murmur prayers among sweeping panoramas of the Appalachian [M]ountains, it is easy to forget that these scenes are not taking place in ancient times. Central spiritual questions, though, have a way of staying in amber. By the completion of the film, Cox had converted to the Eastern Orthodox Church.

Before "New Men" screened at VAE Raleigh on Thursday, December 12, reporters from www.IndyWeek.com spoke with Cox about how he discovered and got access to Holy Cross Hermitage and the appeal of monasticism today.

INDY: How common is a monastery like this in the United States?

SAM COX: There are about thirty or so. A community like this is pretty rare – there are probably 25 or so monks, which is large for a monastery. Most of them are American converts to the Eastern Orthodox Church.

In 2017, the abbot gave permission for five monks to speak publicly. Did they speak to multiple people or just you?

I was the only one. Visitors can go there – you could go there and be a pilgrim if you wanted to, but they’re not going to open up to you about their lives. I was going there over a year and a half for multiple days at a time. I probably lived there for six weeks, just participating in life without filming. I was there for about three and a half months total.

How did you get them to open up?

I mean, I think it was an act of God. Because that’s, like, high-level. Lower-level, the abbot said, "I can see that you’re serious and authentic about this." I showed the abbot a film I had made about the All Saints Orthodox Church, and he really liked it. I’m hoping this can open up more doors – that people can see this and trust that I’ll be respectful.

Did you ever think about joining?

Yeah. It’s a very compelling way of life. I think you’d be hard-pressed to spend that much time there and not be deeply drawn to it.

I think a lot of Americans have an innate suspicion of religious sects.

I converted about a year into the project. I became Orthodox. Being there helped me overcome my suspicion of religion. I realized it’s not an ideology you have to subscribe to; it’s a way of life that applies to people regardless of their intellect or mind. We’re so mind-centered in the West – everything is either intellectual or emotional. That’s the only two modes people have.

They pray the Jesus Prayer, which is "Lord Jesus Christ, Son of God, have mercy on me, a sinner," constantly throughout the day. There’s the morning service that’s from five to seven, and then you can go back to your cell from seven to nine and do whatever you want – more prayers or readings or just preparing. From nine to twelve is morning work period; twelve to one-thirty is lunch, then one-thirty to five is afternoon work period. Five-thirty is dinner and six-thirty is compline [an evening prayer service], and then they’re done by seven-thirty or eight. After nine is silence.

What’s your hope for the film?

I hope that it reaches an audience outside of the Orthodox community. My target audience is not Orthodox people; it’s people like myself who are asking spiritual questions and dissatisfied with contemporary life and feel like something is wrong with it. My hope is that it reaches those people and kind of expands their palette of options.

You’ve talked about feeling like the Protestant Christian church is unable to address contemporary tensions. What is different to you about Orthodoxy?

The depth of it, the scope of how they understand a human person, is vast and mystical and matches the complexity of being human. If you’re not struggling, you’re not Orthodox. I think the spiritual struggle is the Eastern Orthodox experience. And that’s the only way it can be, because the world has problems. So there’s hope in that realism.

Reproduced with permission from www.indyweek.com.