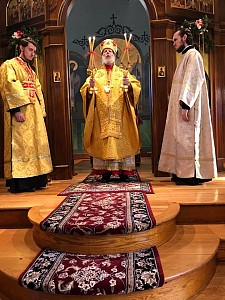 On Thursday, December 19, the feast of the Holy Hierarch Nicholas, Wonderworker of Myra in Lycia, His Grace, Bishop Jerome, paid an archpastoral visit to St. Nicholas Church in Stratford, CT, where he celebrated Divine Liturgy in honor of the parish’s patronal feast day.

Liturgy was served in English and Slavonic.

As is his custom, Bishop Jerome delivered two sermons: the first, in Russian, was on the meaning of the first phrase in the troparion to St. Nicholas [in the Slavonic translation], "A rule of faith, an icon of meekness," since St. Nicholas is remembered as the defender of Orthodox teaching against the heretic Arius at the First Ecumenical Council, while some criticize the defenders of Orthodoxy as if they were "lacking humility and taking themselves too seriously" – but, in reality, it is just the reverse, since the various heretics over the ages have been the proud ones, who have attacked Christian teaching and set themselves up as "great teachers." The defenders of Orthodox teaching, on the other hand, have been characterized by humility.

In English, His Grace spoke on the exchange of Christmas gifts, inspired partly by the good deeds of St. Nicholas and partly by the gifts of the Magi to the Newborn King. The latter embody doctrinal teaching (the gold representing the Kingship of Christ, the incense His Divinity, and the myrrh foretold the Lord’s passion, burial, and Resurrection). The gifts of St. Nicholas embody active Christian teaching in a desire for the salvation of others and the work of Christ on earth. Thus, when we exchange gifts, we should be aware that they are not merely "the spirit of giving," but Orthodox teaching, and that we not only seek the prayers and help of St. Nicholas, but also try to emulate him and follow his example.

After the service, the parish sisterhood presented a traditional, Lenten meal, with warm words spoken in honor of the occasion.

This celebration marked the 90th anniversary of the parish. In 1969, on the 40th anniversary, the late Nikolai N. Alexandroff, longtime dean of Holy Trinity Seminary in Jordanville, NY, showed a rare color movie of his from 1929, of the actual consecration ceremony. This film showed the procession with relics around the church, and since color photos of any kind, let alone color home movies, from that period are a great rarity today, this film was truly noteworthy.

The church was formed as a parish of ROCOR, during the first period of separation between the American Metropolia and what was then the rest of the Church Abroad. In 1935, however, a reunion was brought about through the efforts of the Serbian Patriarch and Metropolitan Anthony (Khrapovitsky), as can be seen in archive photos of the three Metropolitans – Anthony, Eulogius (Georgiyevsky) of Paris, and Theophilus (Pashkovsky) of New York. During the decade of unity that followed, Metropolitan Theophilus reassigned the priests from the ROCOR parishes to other, non-ROCOR churches, and replaced them with priests who had been with the Metropolia from 1926.

As a result, when the second split happened at the Cleveland Sobor of November 1946. Most of the former ROCOR parishes went with the Metropolia – St. Nicholas Church in Stratford among them. Later, first one group of Stratford parishioners returned to ROCOR and formed a new parish [of the Presentation of Christ – ed.] nearby, then the whole St. Nicholas parish also returned to ROCOR. This event was interesting at the time, because through the efforts of the OCA Bishop Job (Osacky) of New England, who attended the first service of Metropolitan Philaret (Voznesensky) in St. Nicholas church, the return took place with a minimum of tensions.

The pastor of some years, Archpriest George Lardas, was transferred to another ROCOR church in the Mid-American Diocese, where he and his family have reported a happy situation, and the current pastor, Fr. Dimitri Jakimowicz, is now celebrating two years and his second parish feast in Stratford. 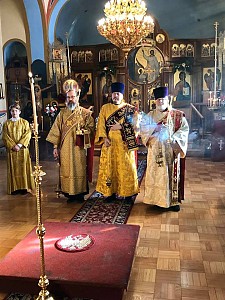