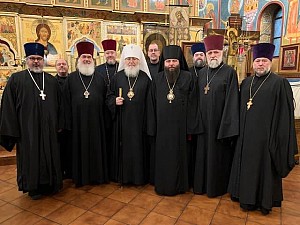 On Monday, December 16, the Eastern American Diocesan Council met at St. John the Baptist Cathedral in Washington, DC, to have its final meeting of 2019. The meeting was chaired by Metropolitan Hilarion, along with the diocesan secretary, Bishop Nicholas of Manhattan.

At the meeting, the Council finalized its work on the "Fiscal Policies & Procedures for Administration of the Eastern American Diocese" manual, which was put into effect by a directive issued by Metropolitan Hilarion. This document will ensure that the Council’s work complies with all Church canons and ROCOR regulations, as well as all local, state, and federal laws of the U.S., and that the necessary transparency will be maintained in the Council’s role as stewards of the diocesan resources. Also, reports were heard from the treasurer and the webmaster. The treasurer’s report included a review of the current balances in the diocesan accounts, an update on the 2018 audit and plans for the 2019 audit, as well as a timeline for the end-of-the-year financial report to the Diocese. The webmaster’s report outlined the work accomplished in the second half of 2019, as well as a strategic plan for a modified layout and content additions for the website in 2020.

Amongst the other business the Council took up was the selection of a Conference Committee consisting of three Council members to prepare proposals of location, speakers, and a budget for the 2020 Lenten Retreat, as well as other events that might occur during the year. The Council also discussed the budget parameters for 2020, voted to complete the transition of all diocesan financial accounts to a national bank, and reviewed the Parish Dues Report as provided by the treasurer, and considered requests from a few parishes for temporary dues exemptions. Additionally, the Council discussed matters relating to the Benevolent Fund and resolved to allocate funds to support the 2019 St Herman Youth Conference and Project Tikhvin in 2020.

After the meeting adjourned, a lenten luncheon was served to the Council by the cathedral sisterhood. Metropolitan Hilarion thanked cathedral rector and council member Archpriest Victor Potapov, as well as the sisterhood, for their gracious hospitality as Council members enjoyed fellowship together.

The Diocesan Council will have its next meeting on Monday, February 17, 2020 at the Synodal Cathedral of the Sign in New York City.