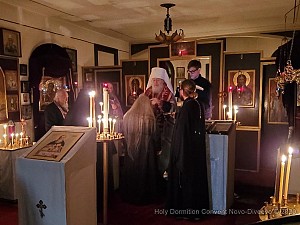 On Wednesday, January 1, at Metropolitan Hilarion of Eastern American & New York paid an archpastoral visit to Holy Dormition Convent "Novo-Diveevo" in Nanuet, NY, where he attended the All-Night Vigil for the feast of Righteous John of Kronstadt.

At Vigil, His Eminence tonsured a novice of the convent, Tatiana (Popova), into the cassock. Sister Tatiana, a native of Siberia, has a Master’s Degree in Thermal Engineering from the Polytechnic University of Tomsk and a Bachelor’s Degree in Theology from St. Tikhon Orthodox University in Moscow. She entered the convent in January 2016 and was accepted by Abbess Makaria as a novice in August of the same year. Before Novo-Diveevo, she worked in churches and monasteries in Russia and the Holy Land. In Novo-Diveevo, she manages the church candle-stand and fulfills her obedience in the sacristy and baking prosphora.

After the tonsure and the vesting of the newly tonsured nun in a cassock and hood, Metropolitan Hilarion offered a congratulatory word to her who is "newly entering this holy life as a monastic," emphasizing that "Our convent is strengthened by prayer. There was a time when the convent became impoverished, but now the Lord granted a new age for us and women of different ages began to enter and are now replenishing the monastic choir, offering their prayers to the Lord God, not only for themselves, but for the whole world… We are thankful to the Lord God for this convent, which is a busy oasis of prayer, worship, and Christian life." His Eminence concluded his well-wishes to the new nun, asking that the Lord save her and that she prepare herself for tonsure to the Lesser Schema.

Abbess Makaria, on behalf of the sisters, thanked the First Hierarch for his holy prayers and paternal care, which have strengthened and increased the convent. 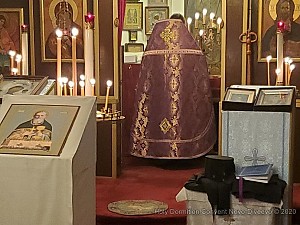