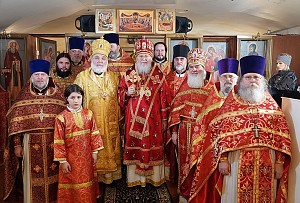 On Friday, February 7, the feast of Holy Hieromartyr Vladimir, Metropolitan of Kiev & Galicia, Metropolitan Hilarion of Eastern America & New York, paid an archpastoral visit to the Church of Our Lady "Unexpected Joy" on Staten Island, NY, where he celebrated Divine Liturgy.

Despite its being workday, many parishioners and faithful from parishes in nearby Brooklyn came to the service. Upon completion of Liturgy, the majority of those praying in church received Christ’s Holy Mysteries.

Congratulating the clergy and faithful with the feast, Metropolitan Hilarion expounded on the life and martyric death of the Hieromartyr Vladimir. His Eminence congratulated the parish rector, Fr. Vladimir, on his namesday, wishing him the aid of God and his Heavenly patron in his pastoral labors.

In turn, Fr. Vladimir spoke about how he came to God, began attending church, and how he was overjoyed to receive in monastic tonsure the name of the Holy Hieromartyr Vladimir, who toiled in his final years in Ukraine, not far from where the future Fr. Vladimir was raised. The rector thanked Metropolitan Hilarion for his visit to the church and for their joint prayer.

After the service, Fr. Vladimir invited the clergy and those praying at Liturgy to a festal lenten luncheon held at a neighboring restaurant. 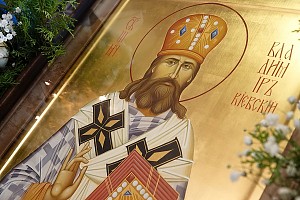