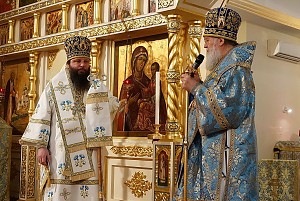 For the occasion of Bishop Nicholas’ namesday, the wonderworking Kursk Root Icon of the Mother of God was present at the divine service; His Grace has been the icon’s guardian for many years. The church was full of worshippers, who came to pray, to commune of Christ’s Holy Mysteries, and to congratulate His Grace on his namesday.

Upon completion of the service, Metropolitan Hilarion congratulated Bishop Nicholas with his namesday, and spoke about the life and labors of the Holy Hierarch Nicholas (Kasatkin) of Japan in the 19th century, in a time when the East Asian pagan population was particularly hostile toward Europeans.

"As a young man on his way to Japan, the Hieromonk Nicholas took counsel from the Holy Hierarch Innocent (Veniaminov), the great missionary who served in Alaska and San Francisco. Among other things, the hierarchal advised him to study the Japanese language. And over the course of eight years, Hieromonk Nicholas learned Japanese, one of the most complicated languages to learn and, with God’s help, in this way broke through the barrier and was able to interact with the Japanese in their own language. At first the local population listed to him with distrust, and some even hated him. One samurai even tried to kill the missionary, but soon himself converted to Christianity. Over the course of many years of the saint’s stay in Japan, he converted many to Orthodoxy, built a large cathedral in Tokyo, and organized a multitude of parishes and seminaries. Now, many Orthodox Christians live and pray in Japan."

The sisterhood organized a reception in the cathedral hall for clergy and parishioners, during which many kind words and well-wishes were offered to Bishop Nicholas. 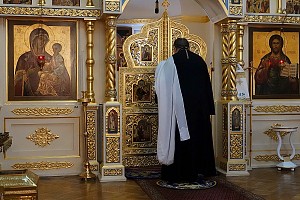