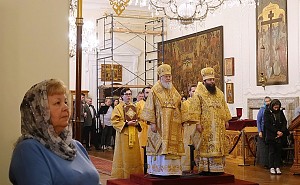 The divine services on the eve of Great Lent were held under the aegis of the wonderworking Kursk Root Icon of the Mother of God. Worshippers filled the church. Most of those who came to pray confessed their sins and communed of Christ’s Holy Mysteries.

Upon completion of Liturgy, Bishop Nicholas reminded the faithful of the significance of Great Lent and spoke about the order of the upcoming Lenten services in the cathedral.

His Grace also reminded those gathered that, on this day, the Church honors the memory of the Holy Hieromartyr Hermogenes of Moscow, Patriarch of All Russia, who lived in the 16th and 17th centuries. Before this, he had served as Metropolitan of Kazan, and had brought many Tatars and pagans to Christ. In 1606, he was elevated to the Patriarchal See, and served as Patriarch of Moscow for six years. This was a troubled time for Russia; there were attempts to force the Patriarch to sign a charter supporting the ascension to the Russian throne of Prince Władysław, son of the Polish King Sigismund III. Those surrounding the Patriarch were prepared to surrender everything to the Catholics. At one point, the Patriarch agreed, but on the condition that Władysław would receive the Orthodox Faith. The prince refused, and then the Patriarch and the Church refused to grant their blessing for a Catholic to become Tsar in Moscow.

"The Patriarch was placed under house arrest in Chudov Monastery. He suffered, but did not lose his faith, the truth that he defended and bore within himself. The Holy Hierarch Hermogenes did in imprisonment in 1612, a martyr for Christ. Later, Moscow was cleansed of foreign occupiers, and in 1613, Michael Feodorovich Romanov was elected the lawful tsar. It is interesting to note that, during the Time of Troubles, our great holy protectress ‒ the Kursk Root Icon ‒ was in the Kremlin. It was discovered in the 13th century, and in 1597 Tsar Theodore Ioannovich invited the Kursk Icon to visit Moscow, where he adorned it with icons of the prophets and a jeweled encasement. The icon then returned to Kursk. In 1605, False Dmitry, in order to legitimize his place on the royal throne, invited the icon to the Kremlin. But neither the first nor second False Dmitrys could fool the people, and all the more so could not fool God. Thus, through his prayers, Patriarch Hermogenes delivered the Russian land from falsehood. Michael Feodorovich ordered that the Monastery of the Sign in Kursk, and five years later, the icon returned to its original habitation. It remained there until 1920, when our protectress joined Metropolitan Anthony and the other hierarchs and their flock in departing Russia, and for 100 years now has been guarding all of Diasporan Rus’ and each fo us.

"Patriarch Hermogenes ‒ a hierarch of God ‒ saved the Russian land, saved our Orthodox Faith, and must turn to him for aid, in order to save our souls from sins, from impure habits and, by the prayers of the Holy Hieromartyr Hermogenes, to stand on the right path."

Upon completion of Liturgy, a bliny luncheon was served by the sisterhood in the cathedral hall, where brotherly interaction continued. Singers of the Synodal choir sang beautifully for those in attendance.

That evening, Vespers with the Rite of Forgiveness was served in the cathedral. 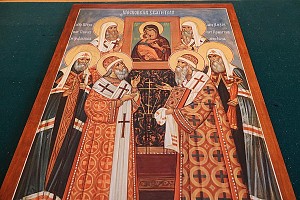