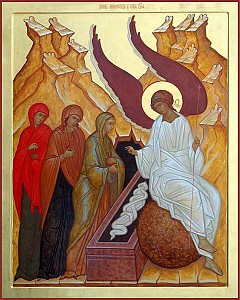 On May 3, the Sunday of the Holy Myrrh-bearing Women, Archbishop Gabriel of Montreal & Canada celebrated Divine Liturgy in the Synodal Cathedral of the Sign in New York City, co-served by cathedral dean Archpriest Andrei Sommer and Deacon Nicholas Ilyin (cleric of Holy Dormition Convent "Novo-Diveevo" in Nanuet, NY). Praying in the altar was the First Hierarch of the Russian Church Abroad, Metropolitan Hilarion of Eastern America & New York. Live-streaming of the services online was arranged for cathedral parishioners who could not be in attendance due to the Coronavirus epidemic.

Upon completion of Liturgy, Archbishop Gabriel greeted the clergy, singers, and faithful at home with the feast of Christ’s Resurrection and the Holy Myrrhbearers, and addressed them with a sermon, in which he highlighted the role of women in the Church and in society as a whole.

Speaking on the meaning of the feast, His Eminence noted:

"The Holy Fathers tell us that the Holy Myrrh-bearing Women were, so to speak, the apostles to the apostles. Why did the Lord permit namely them to be the first witnesses of His Resurrection? The Savior did this because of their fidelity in serving Him during His earthly life. It was they who remained faithful to the Savior until the very end, along with the Most Holy Theotokos and the Holy Apostle John the Theologian. That is why the Lord granted them such a great honor. By this, the Lord showed us, too, that the role of women in the Church is important: just as it was then, during the Savior’s life, so also it is now. And so that no one might think that, if women cannot serve as clerics in the altar, then somehow their role in the Church and society is diminished. Every one of us has place in society and our obedience before God, through which we can obtain salvation. And we know and see that women are more pious: they are more numerous in the churches, and it is they who are tasked with bringing up the children. In churches generally and in our cathedral, there are sisterhoods, which organize luncheons and various events to benefit the parish, and they see to the adornment and good order of the temples. Just as the Holy Myrrhbearers were faithful and served the Savior, so must we also remain faithful until our very last breath."

Archbishop Gabriel called on the faithful to accept the current trial we are facing with meekness and humility, and to pray in our home churches, that the God might soon deliver us from it and that we might once more meet in the temples to glorify the Risen Lord.

Divine services were also held and live-streamed in St. Sergius Chapel in the Synodal Headquarters.