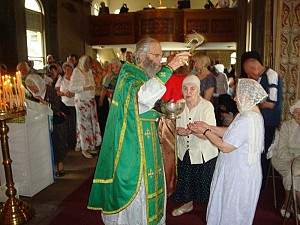 On Tuesday, April 28, the Day of Rejoicing ("Radonitsa"), Archpriest George Zelenin visited many graves in the cemetery at Holy Dormition Convent "Novo-Diveevo" in Nanuet, NY, to serve panihidas. Here we share his reflection upon visiting Father Gleb’s gravesite.

May 11 is the anniversary of the repose in the Lord of Archpriest Gleb, whom I knew for almost a quarter of a century, fifteen years of which we served together in the same altar at Novo-Diveevo Convent. Sometimes in prayer notes for the departed, a person mistakenly writes in Russian; новопреДставленный instead of новопреставленный, which translates to "newly presented" instead of "newly-departed." In the case of Father Gleb, it seems to me for some reason that when he died he actually did "present" himself to the Lord, almost in a military manner: "It is I, Lord, who always knew and loved You and who served You." So much of Fr. Gleb’s form ‒ tall, ascetic, always fit ‒ was of a military character. I think that he, who never served in the army, inherited this bearing from his father, who was an officer of the Tsarist army.

His father was Captain Vladimir Nikolaevich Wleskoff, a hero of the First World War. The captain was awarded five military orders in his time and then was crippled by the Bolsheviks, not in battle, but just by a drunken sailor who chopped off the captain’s hand. He was taken to Germany in 1919, where on August 5, the feast day of the Icon of the Mother of God of "Joy of All Who Sorrow" (‘with coins’) the future archpriest was born. Despite the plight of Russian émigrés, Gleb received an excellent education, first in Belgium as an engineer, and then in Germany as an architect. He finished his studies at the end of the World War II, in Berlin as it was being besieged by the Allies. It is at in this time period that the story which Father Gleb shared with me is set. 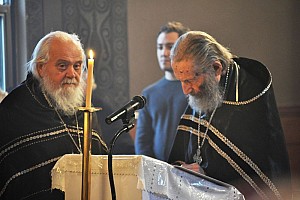 In in a suburb of Berlin, he was riding a bicycle through a large field, when suddenly an American military plane appeared. It is not known why the lone cyclist attracted the attention of the pilot. Perhaps he decided to either practice shooting at a live target or simply to "have fun," or else he did not want to return to the airfield with unexpended ammunition. In a word, it is not known why, but he started firing a machine gun at the future priest of God. There was nowhere to hide. All that remained was to put his trust in the Lord. Gleb appealed to His Most-Pure Mother. Again and again, the plane circled around to attack. Bullets struck to the right and left, ahead and behind, but not one hit him. The Most Holy One showed her miracle similar to the one she showed on August 5, 1888 in St. Petersburg, when during a terrible thunderstorm, lightning struck the chapel, but the holy icon in it, the Mother of God Joy of All Who Sorrow, remained unharmed; only small copper coins from a cup under the icon exploded out, striking it to the right and left, bottom and top. The coins did not touch the face of the Mother of God, leaving the icon intact.

The Theotokos, on the day of whose memory he was born, preserved the future minister of Her Son.

It was after this that Gleb met Fr. Adrian Rymarenko (future Archbishop Andrew, founder of the Novo-Diveevo Convent). Gleb not only became his spiritual son, but it was with his blessing and insistence in 1969, already in America, that he received holy orders. At first, Fr. Gleb continued to work as an architect (one of his projects was the Twin Towers destroyed on September 11) and only came to the convent on Saturdays and Sundays but, over time, he moved with his matushka to Novo-Diveevo, where he labored until his passing in 2014. His life as a confessor and a priest is well known to his numerous orphaned spiritual children… It was through their diligence that this cross was erected ‒ Fr. Gleb was a great almsgiver, and left no inheritance.