Service for the Baptism of Rus’ available in English 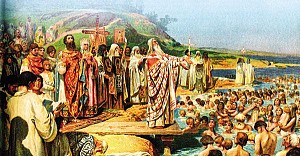 With the blessing of His Eminence Hilarion, Metropolitan of Eastern America & New York, the special service commemorating the Millennium of the Baptism of Holy Rus’ has been translated into English and is now available for download here.

The service, originally published by the Moscow Patriarchate in 1988, is also available for download in the Slavonic script here.

The service borrows many of its themes and hymns from "The Sermon on Law and Grace," delivered by the Holy Hierarch Hilarion, Metropolitan of Kiev & All Rus’, in the middle of the 11th century. The Sermon is considered by scholars and historians to be one of the founding documents of Russian literature. Where applicable, translations of excerpts from the Sermon are taken from Simon Franklin’s Sermons & Rhetoric of Kievan Rus’ (Harvard University Press; 1991).

The service can be combined with the resurrectional hymns from the Octoechos and served on the last Sunday of July.