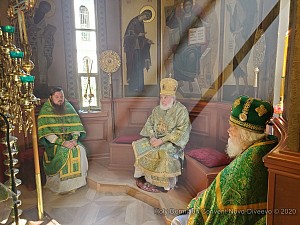 On Saturday, August 1, the feast of the Finding of the Relics of Venerable Seraphim, Wonderworker of Sarov, with the blessing of His Eminence Hilarion, Metropolitan of Eastern America & New York, Archbishop Gabriel of Montreal & Canada visited Holy Dormition Convent "Novo-Diveevo" in Nanuet, NY, and celebrated the festal Divine Liturgy in the convent’s St. Seraphim Cathedral.

His Eminence was co-served by cathedral dean Archpriest Alexander Fedorowski and monastery clerics: Priest Artem Siss, Protodeacon Serge Arlievsky, and Deacon Nicholas Ilyin. Praying at Liturgy were the sisters of the convent, led by Abbess Makaria (Fadina). Singing at the divine services was the cathedral choir under the direction of Jon Arlievsky.

The cathedral was filled to the capacity currently permitted by local authorities, established following the lifting of quarantine measures in Rockland County.

A short moleben was served at the conclusion of Liturgy, after which a procession was held around the cathedral.

In his sermon, Archbishop Gabriel congratulated the clergy, abbess, sisters, and faithful with the feast. He remarked how overjoyed he was to see the number of parishioners lifting their prayers to one of the most revered Russian saints, despite the current trying times. His Eminence also noted the continuing renovation work being done in the cathedral proper: the restoration of the frescoes, the installation of a new floor, and remodeling of the sacristy.

A festal meal for the clergy and sisters of the convent was held, where interaction continued. 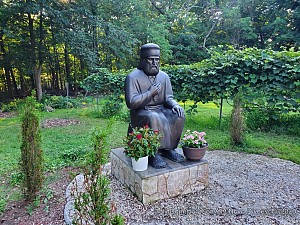