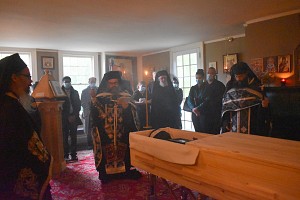 On Tuesday, August 4, the brethren and parishioners gathered at St. Dionysios the Areopagite Monastery in St. James, NY to bid farewell to Archimandrite John (Erickson) who reposed in the Lord on Friday, July 31, after a lengthy battle with cancer.

Officiating at the funeral was Archimandrite Maximos (Weimar; monastery abbot), co-served by monastery clergy. Many faithful who knew and loved Fr. John came to pray for his repose. A live-stream was prepared for those who could not attend in person due to local sanitary restrictions.

In his eulogy, Fr. Maximos expounded on Fr. John’s earthly journey – to Orthodoxy, to monasticism, and ultimately to the priesthood. Archpriest Alexandre Antchoutine (dean of Long Island & the Hudson Valley) relayed the condolences of the First Hierarch of the Russian Church Abroad, His Eminence Hilarion, Metropolitan of Eastern America & New York.

Fr. John was then interred in a local cemetery, after which a memorial repast was held, where interaction and further remembrances of his life’s service were shared. 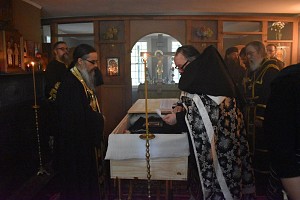