"I suddenly saw garbage all around me and realized that these were my prayers." ‒ How a Russian Protodeacon from the United States recovered from the Coronavirus 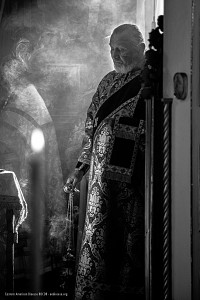 During this past Great Lent, one of the senior-most protodeacons of the Russian Church Abroad in the United States, Fr. Joseph Jarostchuk, who last year celebrated the 50th anniversary of his ordination, underwent a very serious trial ‒ he was diagnosed with the Coronavirus, to the extent that he already began to prepare for death.

Knowing that Fr. Joseph tries not to talk much about himself, I was almost certain that he would refuse to tell this story for publication in "Foma." So, I was surprised and delighted when he said, "If you think that it will be useful for people, then write it."

And I really do find this story very useful. And thus, Fr. Joseph in his own words:

When I struck a fever, we called the doctor. He said that I must go to the hospital. There I was immediately "arrested" and my wife was told that I was very ill. My condition as so serious that I don’t even remember what happened next.

When I started to gradually recover physically, I began to experience a different kind of temptation. I lay and pondered: here Passion Week is approaching ‒ how I love its beautiful services, and then it will be Pascha… and for some reason I remembered the popular belief that if a person reposes on Pascha, he immediately goes to the Kingdom of Heaven.

I remembered this ‒ and then immediately stopped short. I suddenly looked at myself, and was seized by a strange, acute sensation, that the Lord did not hear me. I saw that there was garbage around me, some rubbish bins. And I realized that all of these are my prayers, my labors before God.

It was not some kind of vision; it was all happening in my head. Then I thought, "How can I enter the Kingdom of Heaven?" I was very worried and began to read the Jesus Prayer and other prayers to myself, which I remembered by heart.

After that, everything changed somehow. I felt that the life of any person is the Gospel. The same Gospel, images from which passed through my head for several days in the hospital. I saw and felt everything ‒ from the birth of St. John the Baptist, the Annunciation of the Most Holy Theotokos, to the Resurrection of Jesus Christ.

And then I thought: when I leave the hospital, I will definitely have to change my life and give more of myself to the Church and the Lord Jesus Christ. I felt that all of this was given as a test, so that I could look at my life in a different way.

Perhaps earlier there was some kind of boasting in me: I trusted in my voice, I was praised, I exerted myself. But where was prayer?

I returned home on the eve of Palm Sunday. And from that very day, I began to read my prayers especially carefully ‒ and their words began to open up to me in a new way. In the morning and evening, I light a lamp and read the prayer rule, although in the past, out of laziness, I sometimes skipped prayers or read them quickly and from memory. I try to pronounce every word thoughtfully and I see that it is not easy. The evil one [the devil ‒ trans.] resists, tries to push some thoughts into one’s head. Sometimes a prayer, even "Our Father," has to be read twice. It so happens that sometimes you say it and think: "For whom did I just read that? Let’s start again!"

It may be wrong to say so, but during the days of my illness, I felt as if God had hung around my neck a heavy bag of my sins from my entire life. After Pascha, I asked the priest to confess me at home, because I was too weak to come to church. And I confessed all of the sins from my youth up that I could remember. I wanted one thing ‒ to cast off this bag and begin a new life.

This confession turned out to be incredibly difficult. But I really needed it.

Dimitri Zlodorev / www.foma.ru
Translation by the Media Office of the Eastern American Diocese