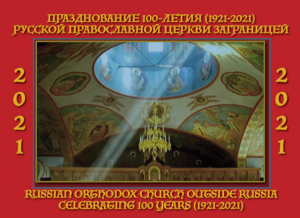 The Russian Orthodox Youth Committee is now taking orders for the 2021 Church calendar, which honors the centennial of the First All-Diaspora Council, which took place in Sremski Karlovci in the Kingdom of Yugoslavia. Announcing the publication of the calendar, ROYC President Archbishop Gabriel of Montreal & Canada writes:

"By the ineffable grace of God, we are entering the new calendar year of 2021. We sincerely wish everyone health and strength of soul and body from the Lord, peace, tranquility, and prosperity to our blessed Fatherland and every Orthodox Russian, wherever they dwell in this new ‘favourable year of the Lord’ (Is. 61:1-2, Luke 4:18).

"In this year, as well as in the last, our calendar is dedicated to one of the most significant events of Russian Church history of the modern age: the 100-year existence of the Russian Orthodox Church Abroad. We remember that Russian Church Abroad begins its recounting from 1920. But in this current year, we celebrate the 100th anniversary of the First All-Diaspora Church Council, which took place from November 21 to December 3 (according to the civil calendar) of 1921 in Sremski Karlovci in the Kingdom of Yugoslavia. And to this day, the activity of the Russian Church Abroad continues, and its service is necessary for many hundreds of thousands of people from all over historical Russia. By God's will, this service will last, because our Church Abroad became the sower of Orthodoxy on all continents, among all the peoples inhabiting these countries, wherever Russians were scattered. We not only tried to preserve our flock in the Orthodox Faith and with love for Russia, but we opened and are continuing to open many parishes for the indigenous inhabitants of the country in which we dwell, where the services are held in their native languages.

Orders can be placed on the ROYC website here.