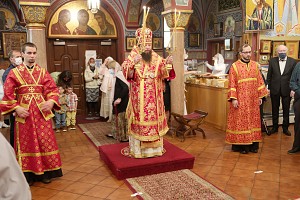 The annual feast of the Beheading of the Forerunner and Baptist of the Lord John ‒ our 71st parish feast day ‒ was celebrated with great edification.

On the day of the feast itself, September 10-11, we celebrated the holy day ourselves. On the evening of September 12, His Grace Nicholas, Bishop of Manhattan, vicar of the Eastern American Diocese of ROCOR, visited us, bringing with him from New York City the Protectress of the Russian Diaspora ‒ the Kursk Root Icon of the Mother of God.

Usually, when we are visited by such exalted guests, we serve one large bilingual Liturgy, but owing to the Coronavirus pandemic and the restrictions placed on us by local authorities, and wishing to give as many of the faithful as possible the opportunity to pray before the wonderworking image, two Liturgies were assigned for Sunday, September 13 The icon was brought to the church for the beginning of the earlier English Liturgy, and remained in the church for the better part of the day.

During the Hours prior to the later Slavonic Liturgy, three men were tonsured readers. The first two were parishioners of the new ROCOR parish in Northern Virginia: Andrew Podolak and Wyatt (Moses) Measells. The third reader to be tonsured was our altar server, Artem Asoskov. Reader Andrei Mouravieff was ordained a subdeacon. At the Little Entrance, Priest Damian Dantinne was awarded the gold pectoral cross "for his zealous service to Christ’s Church." "Axios!" to all of the above clerics!

In light of the Coronavirus restrictions, a general Confession was held prior to Communion, and virtually all of the worshippers present communed of Christ’s Holy Mysteries.

After Liturgy, a short moleben was sung, followed by a procession. Upon completion of the procession, a series of three akathists was served before the wonderworking image. The first two akathists were served in Slavonic and English, while the third was led by Archpriest John Johnson, who came with a large group from his parish of St. Thecla in Kensington, MD.

On Monday morning, Bishop Nicholas departed for Harrisonburg, VA, where His Grace blessed the land where parishioners hope to build the new Church of the Holy Myrrhbearers.

We are grateful to the Lord and to the ROCOR hierarchy for the opportunity offered to Orthodox Washingtonians to pray before the Kursk Root Icon of the Mother of God in their home parish.

His Grace promised to come to us once again with the wonderworking image, in time for the American civil holiday of Thanksgiving at the end of this November.

Glory to God for all things! 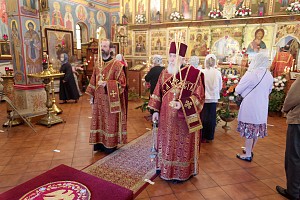