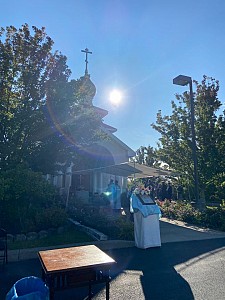 On Saturday the 19th and Sunday the 20th of September, Archbishop Gabriel of Montreal & Canada visited Nativity of the Mother of God Church in Albany, NY, and led the divine services there. His Eminence’s visit for the celebrations were planned in conjunction with the parish’s upcoming patronal feast day, which took place the following day, September 21.

On Saturday night, Archbishop Gabriel officiated All-Night Vigil, co-served by parish and visiting clergy. Singing the service was a male choir, under the direction of Nikhon Schuler.

Liturgy was sung by an expanded parish choir, under the direction of John Schuler.

At the Little Entrance, by the resolution of the Synod of Bishops and in connection with the 40th anniversary of his ordination to the priesthood, Fr. Michael Fritz was awarded the right to wear the miter.

In his sermon, Archbishop Gabriel greeted the assembled clergy and parishioners on their upcoming patronal feast, the 70th anniversary of its founding and 10th anniversary of the new church building’s great consecration. His Eminence also congratulated Fr. Michael Fritz on his lofty clerical award.

The Polychronion was intoned for the hierarchs, clergy, parishioners, and Fr. Michael.

After the service, a bountiful luncheon was organized for all by the parish sisterhood. 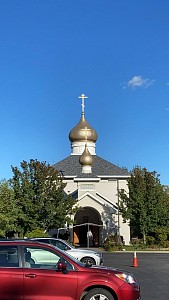