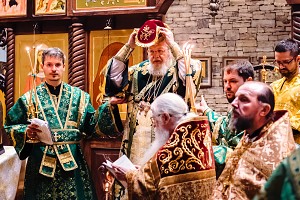 From October 22-25, Metropolitan Hilarion of Eastern America & New York paid an archpastoral visit to St. Mary of Egypt Church in Roswell (Atlanta), GA, where he performed the great consecration of the church.

To the joy of the clergy and parishioners, on the eve of the consecration, the parish was able to extinguish the loan that had been taken out to help pay off the church building.

On Sunday, October 25, Metropolitan Hilarion celebrated Divine Liturgy, co-served by the above-mentioned clergy, during which new minor and major clergy were ordained.

At the reading of the Hours, the First Hierarch tonsured regular parishioners George Bandar and Igor Paschenko readers, while Micah Marvin and Steven Sellers were ordained subdeacons. At the Little Entrance, for their dedicated service to the Holy Church and by resolution of the Synod of Bishops, Fr. John (Townsend) was elevated to the rank of archimandrite, while Frs. Daniel Iliev and Mikhail Beliakov were awarded the right to wear the nabedrennik. After the Eucharistic Canon, Subdeacon Peter Epstein was ordained to the diaconate.

A multitude of parishioners of various nationalities prayed at the divine services. A majority of these communed of Christ’s Holy Mysteries.

Upon completion of Liturgy, His Eminence congratulated the newly awarded, tonsured, and ordained, wishing them God’s aid in their service to the Holy Church and thanking God for a successful consecration of the church.

Parishioners were informed that, with Metropolitan Hilarion’s blessing, a skete dedicated to the Venerable Elders of Optina will be opened at the church, which will be led by Archimandrite John and Hieromonk Alexander. The goal of the skete is to ensure constant prayer in the church, with a gradual transition to daily celebration of the Liturgy here. Currently, Divine Liturgy is celebrated on Wednesday, Saturdays, and Sundays. On days when no Liturgy is celebrated, Midnight Office and Small Compline are served.

A luncheon was served in the parish refectory, during which parishioners joyously interacted with the clergy. The First Hierarch’s visit to St. Mary of Egypt Church took place in an atmosphere of spiritual uplift and sincere joy. 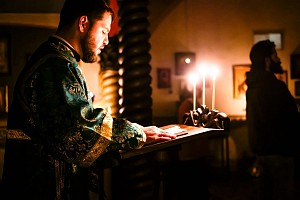