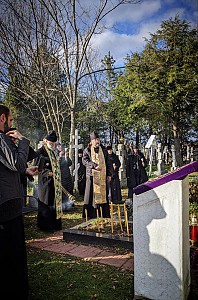 The ongoing COVID-19 pandemic deprived our congregation of our annual parish pilgrimage to Holy Trinity Monastery, this year marking the 23rd anniversary of the martyrdom of Brother Jose Muñoz-Cortes. Nonetheless, on October 30, 2020, a small group of parishioners from St. John the Baptist Cathedral in Washington, DC – Matushka Maria, two parishioners, and I ‒ were able to travel to Jordanville, NY. Our parish has been conducting such pilgrimages to the grave site of brother Joseph for 22 consecutive years, and it was unimaginable for us to miss this year’s anniversary.

On October 31, at 3:00 PM, on the actual day of the martyrdom of Brother Jose, about 40 people (mostly local faithful) gathered his grave for a bilingual Slavonic-English panihida. The service was chanted by Archimandrite Philaret (Raskovsky), Priest Stephen Kaznica, and me. His Grace Luke, Bishop of Syracuse, abbot of Holy Trinity Monastery, joined us in prayer. The faithful sang the responses.

Commemorated at the panihida were Brother Jose, the late Archbishop Leonty (Filippovich) of Chile, who received Joseph into the Orthodox Church, and Schema-Abbot Clement of the Athonite Holy Nativity Skete, who in 1982 gifted Jose the Holy Iveron Icon, which later became known as the Montreal Icon. In addition to these three spiritual strugglers, we also remembered the names of the newly reposed Metropolitan Amfilohije, champion of the Serbian Orthodox Church in Montenegro, the newly reposed Archpriest Dimitry Smirnov, the newly reposed Archdeacon Iliodor of the Optina Hermitage, and the ever-memorable martyred Priest Daniel Sysoev.

Deacon Nectarios Yangson, who in years past joined our pilgrimage and brought the myrrh-streaming Hawaiian-Iveron Icon of the Mother of God to Jordanville, could not be with us because of the regulations governing travel during the COVID-19 pandemic. In the place of the Hawaiian Icon, the so-called Optina Icon of the Mother of God was placed on the analogion next to Brother Jose’s grave. This icon, which was housed in our parish in Washington since 2002, is on loan to St. Elizabeth Convent in Jordanville. Fr. Nectarios prayed with us via FaceTime, as did Angela Muñoz-Cortes, sister of the martyred Jose, who lives in Florida.

About 30 large candles were placed in the ground above Jose’s grave and burned throughout the service.

During the panihida, a little boy (from Boston?) was observed holding a small candle in his hand that was extinguished by the wind and miraculously reignited! Mother Theodora of the St. Elizabeth Skete was holding her phone in one hand for Fr. Nectarios to watch the panihida. In the other hand, she was holding a candle that was extinguished by the wind and moved to put the candle in her cassock pocket, when suddenly it reignited…

After the panihida, I shared with the faithful the story of the Optina copy of the Montreal Icon. Years ago, I wrote a testimony about this. It can be found here.

A few hours later, we attended the Saturday Vigil, sung by two outstanding seminary-monastic choirs directed by Deacon Nicholas Kotar and Reader Seth Davidenko. The singing was magnificent and prayerful. The 3½ hour service seemed to pass in an instant.

After the Saturday vigil, two of our pilgrims from Washington once again visited Brother Jose’s grave and, to their surprise, the numerous candles which we lit at the 3 o’clock panihida were found burning down to the ground and forming craters around the flickering beeswax remains. It seemed that the whole area of the top of the grave site was in flames. This phenomenon is easily discernible in the photos below.

At 1 o’clock in the morning, another pilgrim went to the grave, and the candles were still burning…

The next day, we attended the resurrectional Divine Liturgy for the Righteous John of Kronstadt. As Bishop Luke was in Utica, NY for the feast day of St. John’s parish there, I was given the honor of officiating Liturgy.

In my homily at the end of Liturgy, I spoke on the Gospel reading of the Parable of the Sower. In St. Matthew’s account, the Lord Himself explained the meaning of His parable. Christ is the sower of the Word of God. After His Ascension into Heaven, He charged His apostles to continue sowing the seeds of the Gospel, and the apostles passed this responsibility on to the bishops and priests of the Church. For 2,000 years and to this day, the saints continue fulfilling this charge. Among them was St. John of Kronstadt, who brought multitudes to live the Gospel truths. In our days, this undertaking was taken up by such people as the Holy Hierarch John of Shanghai, Hieromonk Seraphim (Rose), and Brother Jose Muñoz-Cortes. Each of them accomplished this mission of sowing the Word of God in different ways: Archbishop John through his miracles, preaching, instruction, and ascetic way of life; Fr. Seraphim through his theological compositions; the martyred Br. Jose through his service to the Mother of God. For 15, years the Montreal Icon wrought miracles of healing of both soul and body and brought many people to the Faith. In conclusion, I invited all present at Liturgy to join us in a final panihida for Br. Jose at 2:00 PM.

At the appointed time, a cold rain began falling, which made conducting the panihida at the grave of Brother Jose impossible. About 40 of the faithful gathered in the monastery’s small Dormition cemetery chapel. The seminary choir sang at the service and warmed the hearts of those present with their uplifting and solemn singing.

Before the start of the panihida, as there were new people in attendance, I once again spoke of the Optina Icon and explained why the names of Archbishop Leonty and Schema-Abbot Clement are commemorated at panihidas for Br. Joseph. In closing, I reminded those present for the panihida that the year 2020 marks the 100th anniversary of the establishment of the Russian Orthodox Church Outside of Russia. The highlight of the jubilee year could have been the glorification of Fr. Seraphim (Rose) and Brother Jose. Sadly, owing to our indifference, this opportunity was missed.

During the three-day pilgrimage, our group from Washington visited St. Elizabeth Convent and spoke at length with the nuns. The sisters gave us a tour of the new building of the convent, which is being superbly renovated. The nuns of St. Elizabeth’s hope to make this their new home soon.

Glory to God for giving us the opportunity to visit the sacred sites of Holy Trinity Monastery! 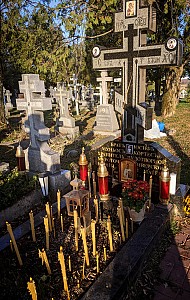