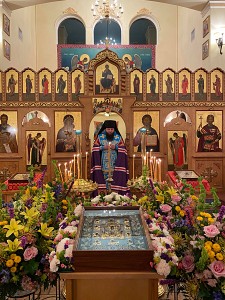 On Saturday, November 7, В субботу, Eastern American Diocesan vicar Bishop Nicholas of Manhattan began his visitation to the Florida parishes of the Russian Church Abroad with the Kursk Root Icon of the Mother of God.

Despite Tropical Storm Eta bearing down on the state, the Protectress of the Russian Diaspora, accompanied by Bishop Nicholas and Florida dean Archpriest Alexandre Antchoutine, arrived in Miami on Saturday, and that evening was greeted at Three Hierarchs Church in Hollywood, FL. Upon completion of All-Night Vigil, Bishop Nicholas officiated a moleben and akathist before the wonderworking icon of the Most Holy Theotokos, co-served by Fr. Alexander and deanery cleric Archimandrite Siluan (Lembei). A large number of parishioners fervently prayed and had the opportunity to venerate the wonderworking image. The diocesan vicar anointed all of the faithful with holy oil, and blessed them with copies of the Kursk Root Icon. The parish sisterhood organized a fraternal supper.

That same day, His Grace arrived with the Kursk Root Icon at the Apostolic Mission of Christ (under the Protection of the Holy Apostles) in Miami where a moleben and akathist were served before the Kursk Root Icon in Spanish and English. The service was officiated by parish rector Archpriest Peter Jackson, co-served by Archpriest Romanos Galben and Deacon Georgios Zervos (attached). The church was filled with faithful, who came to pray before the holy image, and were anointed with holy oil and received copies of the icon. The sisterhood organized a luncheon for all.

Despite the inclement weather, on Monday, November 9, the wonderworking icon successfully traveled to Palm Coast, where that evening Bishop Nicholas officiated a moleben and akathist before the Kursk Icon in St. Nicholas Church. Co-serving with His Grace were Fr. Alexandre Antchoutine, parish rector Priest Vladimir Kaydanov, Priest Theodore Stavru, and parish Deacons Leo Opie and John Kern. The arrival of the wonderworking icon was a great consolation for parishioners and the large number of visitors.  They call received copies of the holy image.

On Tuesday evening, November 10, His Grace officiated the moleben and akathist before the Kursk Icon in St. Andrew the First-Called Mission in Daytona Beach, co-served by parish rector Archpriest Andrey Pastukh and Fr. Alexandre Antchoutine. The faithful who came to venerate the wonderworking icon were comforted by its presence, and had the opportunity to interact with the hierarch and clergy at a fraternal supper.

Despite the weather, a large number of worshippers filled all of the churches that the Protectress of the Russian Diaspora visited, including Russians, Ukrainians, faithful from Greek parishes and churches of the Orthodox Church in America, who came to honor the holy icon that once upon a time appeared near Kursk, and who always turn in prayer to the Most Holy Theotokos. 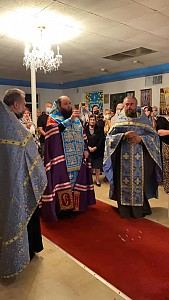 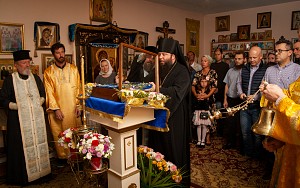