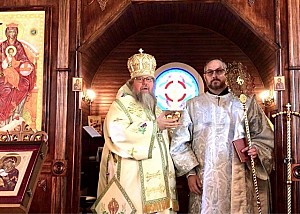 Recently, two diaconal ordinations expanded the ranks of the clergy at St. Herman of Alaska Church in Stafford, VA and St. Demetrios of Thessaloniki Skete in Spotsylvania, VA. Metropolitan Jonah (Paffhausen) serves as rector of both.

After the Eucharistic Canon, Monk-Subdeacon Mark (Sanford) was ordained to the diaconate. The newly ordained Hierodeacon Mark will fulfill his service at St. Herman Church.

Metropolitan Jonah delivered the sermon, which can be viewed on YouTube here.

After the service, a festal meal was held in the parish fellowship hall to celebrate Fr. Mark’s ordination and Metropolitan Jonah’s birthday.

After the Eucharistic Canon, Monk-Subdeacon Silouan (Brown) was ordained to the diaconate. The newly ordained Hierodeacon Silouan will fulfill his service at St. Demetrios Skete.

Metropolitan Jonah delivered a sermon on the Sunday Gospel reading and the life of St. Demetrius.

At both services, the choir sang beautifully under the direction of Ms. Stephanie Yuschak.

After Liturgy, a festal meal was held in the parish hall to celebrate Fr. Silouan’s ordination. 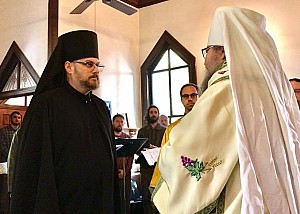