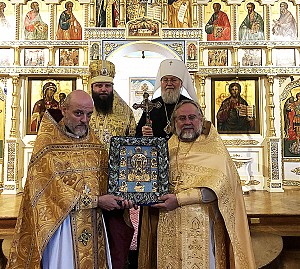 On Friday, November 20, the 100th anniversary of the establishment of the Supreme Ecclesiastical Authority Abroad, His Grace Nicholas, Bishop of Manhattan, celebrated Divine Liturgy in the Synodal Cathedral of the Sign in New York City, residence of the First Hierarch of the Russian Church Abroad.

Concelebrating with His Grace were cathedral dean Archpriest Andrei Sommer and Archpriest Serafim Gan, Chancellor of the Synod of Bishops. Praying and partaking of the Holy Gifts was His Eminence Hilarion, Metropolitan of Eastern America & New York.

The divine services were held in the presence of the Kursk Root Icon of the Mother of God "of the Sign," before which a moleben was served afterward. Special petitions were made for newly reposed Patriarch Irenei, Primate of the Serbian Orthodox Church, which had provided safe haven for a multitude of Russian refugees a century ago, whose Patriarch at the time blessed the establishment of the independent Supreme Ecclesiastical Authority Abroad, which later became the Synod of Bishops of ROCOR.

After the customary singing of Many Years, the archpastors exchanged greetings.

Metropolitan Hilarion gave his blessing to read his Jubilee Epistle from the ambos of all churches of the Church Abroad this Sunday, November 22.