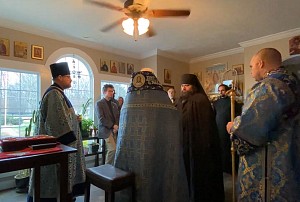 On Saturday, December 5, His Eminence, Metropolitan Jonah (Paffhausen), celebrated Divine Liturgy at St. Demetrios of Thessaloniki Skete in Spotsylvania, VA. Concelebrating with Metropolitan Jonah, who is abbot of the skete, were Deacon Joseph Sirko (cleric of St. Herman of Alaska Church in Stafford, VA) and Hierodeacon Mark (Sanford; a member of the monastery brotherhood also assigned to St. Herman Church). Praying in church was Priest John Cook (rector of St. Tikhon Church in Ruther Glen, VA).

During Liturgy, after the singing of the troparia and kontakia and before the Trisagion, Hierodeacon Silouan (Brown; skete cleric) was tonsured to the Lesser Schema.

His Eminence joined the choir in singing the sessional hymn from the Canon from Sunday of the Prodigal Son: "Thy fatherly embrace hasten to open to me, for like the prodigal have I spent my life. Disdain not a heart now impoverished O Saviour, Who hast before Thine eyes the inexpressible riches of Thy mercies. For to Thee, O Lord, in compunction I cry: Father, I have sinned against Heaven, and before Thee."

Regarding the tonsure to the Lesser Schema:

The abbot says "The merciful God, like a Father Who loveth His children, beholding thy humility and true repentance, child, receiveth thee as a prodigal that is penitent and fallest down before Him with a contrite heart," and questions him who approaches: "Why hast thou come hither, Brother, falling down before the Holy Altar and before this Holy Assembly?" The Abbot knows why he has come, but he asks this so that the desire of his heart may be made manifest to all. Having received the reply, "I am desirous of the life of asceticism, Reverend [Master]," he again asks, "Desirest thou to be deserving of the Angelic Habit and to be ranked in the company of the monastics?” ‒ "Yes, God helping me, Reverend [Master]," the novice humbly replies; the rector then blesses his intention with the words: "Truly a good and blessed work hast thou chosen; but only if thou dost also accomplish it. For good works are obtained by labour, and achieved with pain.

Not content with the voluntary approach of the novice and his initial confession, he poses further such questions: of his own good will cometh he to the Lord ‒ not by any necessity, or constraint; will he abide in the monastery and the ascetic life until his very last breath? Will he keep himself in chastity, sobriety and piety, and in obedience to the superior and all the brethren? Will he endure all the strain tribulation belonging to the monastic life, for the Kingdom of Heaven’s sake? To each of these questions he hears the novice’s same humble reply, filled with knowledge of his infirmity and hope in grace-filled aid: "Yes, God helping me, Reverend [Master]."

The abbot entrusts to the newly tonsured the paraman, riassa, mantle, cowl, prayer rope, and sandals, each with a special prayer for their use as weapons in his spiritual warfare. He then asks him:

"What is your name, Brother?"

"May you be saved in the Angelic schema."

The choir was led by Bessarion Grant and composed of community members from St. Herman Church and St. John the Baptist Cathedral in Washington, DC.

Upon completion of the service, Metropolitan Jonah greeted those gathered, thanking them for coming to support bear witness to the monastic tonsure of Fr. Silouan, encouraging them to pray for him in his new monastic degree.

Following Liturgy, a festal luncheon was offered in the monastery refectory to celebrate Fr. Silouan’s tonsure and his birthday. 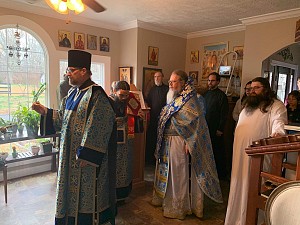