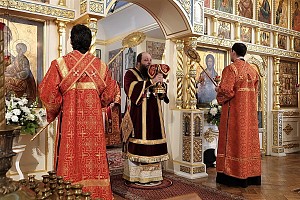 On December 13, the 27th Sunday after Pentecost and the day when the Holy Church honors the memory of the Holy Apostle Andrew the First-Called, Eastern American Diocesan vicar Bishop Nicholas of Manhattan celebrated Divine Liturgy in the Synodal Cathedral of the Sign in New York City. Concelebrating with His Grace were cathedral clerics: dean Archpriest Andrei Sommer, Archpriest Edward Chervinsky, and Protodeacon Nicolas Mokhoff, as well as Deacon Nicholas Ilyin (cleric of Holy Dormition Convent "Novo-Diveevo" in Nanuet, NY). Praying in the altar were Their Eminences, Metropolitan Hilarion of Eastern America & New York, First Hierarch of the Russian Church Abroad, and Archbishop Gabriel of Montreal & Canada).

The service was held under the aegis of the wonderworking Kursk Root Icon o the Mother of God. The Synodal choir sang prayerfully under the direction of Vadim S. Gan.

The parishioners who attended Liturgy prayed before the Protectress of the Russian Diaspora and a reliquary with a piece of the relics of the Holy Apostle Andrew. Most of the parishioners communed of Christ’s Holy Mysteries.

Upon completion of Liturgy, His Grace greeted the clergy and faithful with the feast and the Lord’s Day, and said in his sermon, in part:

"Today we heard important words from the Apostle Paul: ‘Be strong in the Lord, and in the power of His might’ (Eph. 6:10). We have moments when we are alone, or sick, or worried over something, and even without meaning to, we remember our parents, our departed relatives. They are no longer with us, but have good memories of them, and even this makes us feel better. And, of course, how could we not remember our Savior? The Apostle Paul writes, ‘be strong in the Lord;’ that is, we must always try to think about the Lord, about how the Lord came to earth in order to save mankind and deliver us from sin. We have an opportunity to be strong in the Lord, thanks to the feats that He accomplished. By attending our divine services, taking part in the Sacraments, we, of course, become strong in the Holy Spirit.

"The Apostle further writes, ‘Put on the whole armour of God, that ye may be able to stand against the wiles of the devil’ (Eph. 6:11). This means that we have the Orthodox Faith, our teachings, the Cross of Christ. Around us are many powers that constantly tempt us. But if we will be strong and truly bear the Orthodox Faith in our hearts during our lifetime, it will defend us from these dark, sinful powers… And if we will see salvation under the protection of the Lord Jesus Christ, then by the words of the Gospel and by our prayers, in which the Holy Spirit acts, we will be saved.

"So did the Holy Apostles preach, among them the Holy Apostle Andrew the First-Called, whom we glorify today. Together with the Apostle John the Theologian, he was a disciple of St. John the Baptist, who pointed to our Savior, Jesus Christ, saying that He was the Lamb of God, which taketh away the sin of the world. The Apostles Andrew and John the Theologian followed after Christ and were chosen by the Savior to be among the Twelve Apostles. The Apostle Andrew the First-Called not only followed after and was with the Lord, but accepted Jesus Christ with his whole heart and soul as the Savior of the world. And this is a great example for us ‒ never to doubt that through Christ are we saved from sin, and have a defense against the dark powers. The Apostle Andrew is also an example for us of how we must leave behind all that is tumultuous and sinful in the world, in order to be with Christ and fulfill the commandments given to us.

"The Holy Apostle Andrew enlightened Asia Minor, the lands of the future Kievan Rus, Romania, and Bulgaria, and reached Greece. The Apostle Andrew blessed the lands of Kiev and Novgorod, and we accept his labors with love and gratitude. He also preached and worked miracles in Greece, but it was there that he was crucified. In the city of Patras, there is a church in honor of St. Andrew, which to the right of the interior holds his precious head, and on the left ‒ a large piece of the Cross. There, pilgrims can pray and entreat the apostle’s help."

Bishop Nicholas called on parishioners to pray to the Lord Jesus Christ and to the Holy Apostle Andrew, that next year we might be able to visit the holy sites in Jerusalem, Greece, and other places, in order to be enlightened, be strong, and be fortified in the Orthodox Faith.

His Grace congratulated Fr. Andrei Sommer on his namesday, wishing for him to continue to be a good pastor. Bishop Nicholas also congratulated all of the cathedral helpers and parishioners named Andrew, and also those named Nicholas, who will be celebrating their Heavenly patron on Saturday, December 19 ‒ the feast day of the Holy Hierarch and Wonderworker Nicholas. 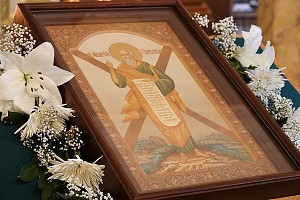