"My Grenada" ‒ Part II ‒ From the Diary of Hieromonk Ambrose (Sitalo) 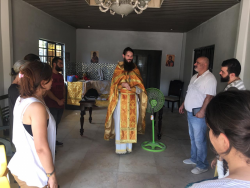 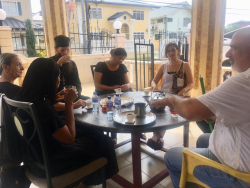 Historically, in Catholic countries, before Lent, a carnival (in Latin, "goodbye meat") is organized. It has long lost its religious significance, but acquired an entertaining meaning for Caribbean people and their culture. In order not to compete with Trinidad and Tobago, where it is celebrated mostly in February but rarely in March, depending on the Gregorian calendar, the Grenadians moved it to mid-August. At this time, many dress up as ‘Jab Jabs,’ the manifestation of devils, and they drench themselves with oil. As my friend explained, this is a symbol of rebellion against slavery. Slave traders called runaway slaves who managed to slip out of the hands of their masters ‘devils’ in French (Jab-jab); in order to [slip through their hands] successfully, they would cover their whole body with oil.

At this time, I decided to stay on the farm and not go anywhere.

A month earlier, I went to the Caribbean Coding Academy to meet friends. They advertised their courses to 25 Catholic priests. Why? "So that they have a more holistic approach to the members of their communities, not only engaged in counseling, but also aware of their needs for employment, etc." After a three-month course, they offer employment. Five priests expressed a desire to study, but none of them appeared.

In addition to the prospects of employment and financial independence of our religious community, taking courses could serve as a way to combat idleness. Having developed inside, idleness can spread to church affairs. On the other hand, this could turn out to be unnecessary entertainment. After weighing everything, I decided to sign up, and I received the blessing from my Bishop.

During my stay in Grenada, I also met the Catholic Bishop of Grenada, Father Clyde Harvey, and several of his priests, who received me with enthusiasm. Bishop Harvey invited me to visit him: it turned out that a letter had come to him by mistake in my name from the Ministry of Grenada regarding the availability of land. In the end, he asked me for prayers and blessings.

The first 24 prosphora[8] in Grenada were baked today at the Ideal Bakery on Mt. Pandy Beach. I was invited to meet with the owner of the bakery to come and participate in the process myself, wearing an apron.

For me, this is the best option ‒ I felt the same way as when practicing in the prosphornia[9] in Jordanville, NY. Actually, they were surprised that I did not want to put either sugar or fat. For me, the situation was also significantly different ‒ scales with weights, weighing "by eye" (not like in a monastery with pharmacy electronic scales). We cleaned a huge flask for a batch from the previous dough. Carl, my assistant and supervisor, also added water "by eye." Then I rolled part of the dough 50 times. Once, however, I mistakenly put the machine out of order because I filled the machine with a thicker layer of dough. The machine was dangerous for fingers, and dough is usually simply thrown into it. Carl suggested immediately sculpting the tops on the bottoms, cutting out the tops with a glass of a smaller diameter, and I smeared the bottoms with holy water. It was different in the monastery ‒ they were left to approach separately, and then combined, before cutting out about one diameter from the dough of different thickness. But when I put the seal, the dough was flattened and it turned out thinner. I went away for two hours. When I returned, almost everyone left, and the bunches were already in the furnace. I asked them to get them to pierce with a needle, so that during baking, air pockets would not form. Twenty minutes later, it turned out to be very cute and wonderful tasting prosphora, but the tops and bottoms of some were too fused that some of the print disappeared, and the cut was too soft; some had small air cavities inside, so only a few of them were fit for Liturgy. I wondered about using them together with the ones from the monastery from the freezer.

Recently, a woman came to worship, who found herself in a difficult life situation in search of spiritual help. Anna had not been to church for a long time and wanted to confess. I asked if she was baptized. As I expected, Anna replied that she was already baptized. In adulthood, she was baptized by complete immersion, confirmed by the Catholics, and even underwent training with them as a catechist. I explained that in ROCOR practice this is not considered baptism, and all who come to the Orthodox Church need to be baptized. Since the Roman Catholic Church and our Church are very similar to her, I said that I had to talk about the difference in a few meetings, and also invited to the Dormition to serve in Grenville (at Saed’s shop) and Sunday service in Saint George.

Anna has two children, and she can always baptize them with the Catholics in Trinidad, who will give out all the necessary documents for the school; however, I do not yet have a license and I cannot issue baptism documents.

In response to my question, why would she want to join? She replied that this is her inner calling. She had heard about Orthodoxy before, and she liked the Sunday service to which I invited her. For this meeting, we did not touch the issues of doctrinal differences, but we talked about the fact that only those who want to become saints can join the Orthodox Church.

This is not only an intact teaching, but also morality. Since she had to deal with perverts at work; we discussed this topic. I said that I cannot judge those who hate perverts and their abomination before God. After all, the Sodomites became the cause of the destruction of their own country, Sodom. It is not for nothing that the Bible speaks of rain of hot coals with burning sulfur prepared for some (Psalm 10:6). According to St. John Chrysostom, those "induce hell to appear prematurely." When such people become priests, this is a special manifestation of Satanism. I told Anna how they were treated during the reign of the Holy Emperor Justinian.

She would like to join through the Sacrament of Confession, but I convinced her to rely on the will of the hierarchical leadership in this matter and sent her a sample request to my Metropolitan to join the Orthodox Church. I recalled that in the petition to the metropolitan she should indicate the obligation to raise children in the Orthodox Faith, so I suggested joining the children when I arrive in October in Trinidad, where they live. Anna wrote a request to Metropolitan Hilarion of accession and agreed to join through the Rite of Baptism right now. I thought that she needed time to learn more about Orthodoxy and offered to wait and solemnly be baptized with the children, all together. After that, at sunset, we served Vespers, and I escorted her home.

During the operation of the radio station in Gouyave, I managed to release several radio programs about Orthodoxy, in which listeners could ask questions. Also, I regularly visited these programs over the past six months.

This time, Anna went with me. We didn’t get on the program, but I took the vestments with me and made the rite of making her a catechumen. Since the Reverend Martyr Anna (Yezhova; +1937) is celebrated today, I proposed this saint as her patroness and I told her a short life and the circumstances of the persecution of Christians in the last century.

Anna again asked to be baptized tomorrow but, again, I asked her to wait until she was convinced in practice that the spirituality to which she resorted, in fact, had the power to help solve the problems that arise.

We met a cane juice seller who had previously visited the radio program. It turned out that the former presenter of the radio broadcast ordered himself the so-called "mourning water" from a Nigerian pagan priest from England. He sprinkled his friends (and in particular on himself) and even boasted that he sent demons to them. We ended this evening with a long conversation with him. He recounted how Soviet soldiers were teaching him to use weapons during the 1983 revolution, and how he fled from the Americans from Grenada to Trinidad.

August 30th. Meeting at the farm

I invited Anna to the next meeting at the farm. Since there was no one to give her a lift, she came with a neighbor ‒ the son of a Syrian merchant, who (the son) studied magic in different places and called himself an "Obeah man," in which he believes that his energies attract and combine with other natural forces or earthly elements.

He was in an Afro-printed turban, introduced himself as a vegan, with a Masonic symbol and something else around his neck. We sat in a circle of acquaintances, and when it started to rain, only the Syrian man and I remained at the table (in my observation, Afro-Caribbean, dark-skinned people for some reason especially do not like to be wet by the rain), and I began to ask him how he determines with what spiritual force he deals: good or evil. He said that the forces with which he operated are neutral, but he realized that some magicians attract help from demons or the dead, and he condemns such practices. Then I asked whom he prefers to call. He replied, the Archangel Michael. I said that in Orthodoxy, we call for the help of righteous spirits in prayers, so that they help us to be with Almighty God through repentance. The greatest miracle is repentance. And by using the example from the Sermon on the Mount, I explained what a high moral standard a person is called to achieve through repentance. Jonathan (that was the name of the magician) listened with interest and agreed.

I was distracted by other guests. At this time, Jonathan was asked to show some magic for distinguished government officials, and he began to show them different tricks: he would take the watch off the owner without his knowledge, then he would pour water from one hand to another, then he would clap his hands and blow at a woman. All this was observed by those present and someone was filming with a video camera. I found this outrageous, and I removed myself from the magic entertainment. Anna wrote me a message that she is tired of communicating with people and is waiting for me. When I returned, Jonathan went out to freshen up, and the familiar Catholics explained to me that it was not magic, but sleight of hands, which was confirmed by Jonathan, who had returned. Then they began to examine with interest my pectoral cross and its inscriptions. Jonathan also examined it, not paying attention to the neighboring table, where he was asked to show more "magic". I explained that the demons have bad memories associated with the Cross, so they are afraid of it because they were once defeated by it. I wished everyone, including Jonathan, to be with the Conqueror and not with the vanquished.