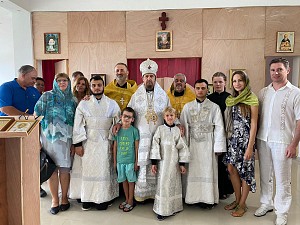 On Saturday, December 19, the feast of the Holy Hierarch Nicholas the Wonderworker, with the blessing of the First Hierarch of the Russian Church Abroad, Metropolitan Hilarion of Eastern America & New York, Bishop Isaac of Vorzel, a vicar of the Kiev Diocese of the Ukrainian Orthodox Church, consecrated the Church of St. Seraphim of Sarov in Bávaro, on the eastern coast of the Dominican Republic. Before they had their own church, the faithful gathered for services at a parishioner’s house for 10 years.

The mission in Bávaro is pastored by Fr. Nenad Flora, a recently ordained priest from America with Serbian roots and a Dominican wife, Matushka Anastasia.

The consecration of the new church is a testimony to the growth and development of the Orthodox mission in the Dominican Republic that was started in 2008 by Priest Rafael Martinez Gonzalez. Four years prior, in 2004, Metropolitan Kyrill, chairman of the Department of External Church Relations and future Patriarch of Moscow & All Russia, visited the Orthodox Christian faithful there, served a moleben, and expressed his hope for the formation of a parish with regular services.

Four years later, the Russian Church Abroad opened a church in honor of the Kazan Icon of the Mother of God in the city of Puerto Plata. Over the course of 12 years, communities were formed in six cities throughout the country. The community of St. Seraphim in Bávaro was formed two years after the opening of the Kazan Church, and then came the mission parishes in Jamao al Norte, Sosúa, Las Terrenas, and Santo Domingo.

As Fr. Rafael was the only priest in the country for many years, it was not uncommon for parishioners from different cities to gather in one place for the services. With the arrival of Fr. Nenad, it will be easier to serve at individual parishes and for each mission to grow. Moreover, Fr. Rafael has been sick with the Coronavirus twice, and was only released from the hospital a few days ago.

The Kazan Church in Puerto Plata operates a Russian-Dominican Center of Science & Culture, where the locals can come learn about Holy Orthodoxy and study the Russian language, which helps them find work as tour guides. Fr. Rafael and other representatives of the Center teach the Law of God and a course on human values at one of the city schools.

Currently, the majority of the parishioners are Russian-speakers from former Soviet republics, but there are also Serbs, Greeks, Romanians, Bulgarians, Canadian expatriates, and native Dominican converts. The latter group demonstrates the necessity of these new mission parishes.

Fr. Rafael is a Dominican who converted to Orthodoxy in Odessa, Ukraine, where he studied at the polytechnic institute in 1976. His Church life deepened while studying at the Electrotechnical University in St. Petersburg, from which he graduated in 1984. In a Russian-language interview in 2016, Fr. Rafael spoke about how he and his wife periodically go on pilgrimages. After one such trip to St. Petersburg, the couple prayed at the relics of Blessed Xenia of St. Petersburg, after which they were blessed with a long-awaited child.

Contact information for the Orthodox Mission, as well as instructions on how to donate, can be found on the website of the Russian Orthodox Church in the Dominican Republic www.ortofe.org or on Facebook here: www.facebook.com/ortofe. 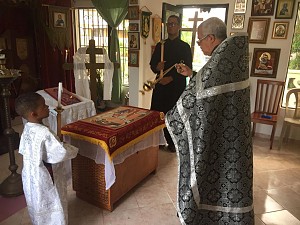