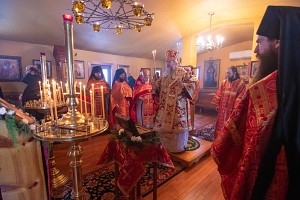 On Thursday the 24th and Friday the 25th of December, Metropolitan Jonah (Paffhausen) paid an archpastoral visit to Holy Cross Monastery in Wayne, WV, where he officiated the divine services. On Thursday evening, His Eminence presided over the All-Night Vigil for Venerable Herman of Alaska. The following morning, he celebrated Divine Liturgy, co-served by monastery abbot Archimandrite Seraphim (Voepel) and monastery clergy.

Metropolitan Jonah and monastic brotherhood celebrated this joyous feast of the leader of Orthodox monastics of North America in the quietude of the Appalachian wilderness and during a heavy snowfall.

During his homily at the end of Liturgy, Metropolitan Jonah exhorted the brotherhood to be beacons of faith to our people and land by embracing true repentance, which is accomplished by an internal renewal of mind and heart. Using the example of St. Herman, who embodied living faith and awareness of God, the Metropolitan encourage the brotherhood to be aware of the presence of God and to surrender to His will. Thus abiding in the living presence of Christ, the monastic brotherhood will bring people into the presence and awareness of Christ.

After the service, a lenten meal was served in the monastery refectory. 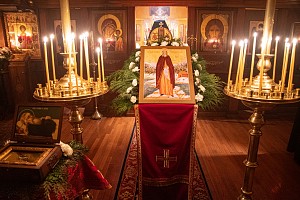