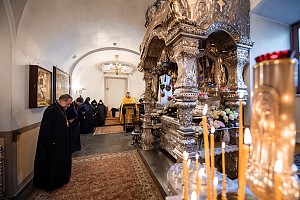 Fr. Sergiy, joined by the sisters of the convent, greeted the representatives of the Russian Orthodox Church Outside of Russia, and led them to the convent’s Holy Protection Church, where they venerated the relics of Blessed Matrona of Moscow and prayed at a moleben. With the blessing of His Holiness Kyrill, Patriarch of Moscow & All Russia, an icon of Blessed Matrona with a piece of her relics was presented for the Florida Deanery.

In turn, the delegation members presented Holy Protection Convent with a copy of the principal icon of the Russian Diaspora – the wonderworking Kursk Root Icon of the Mother of God "of the Sign."

After the moleben, the delegation was given a tour of Holy Protection Convent’s museum, which includes a telling of the life of Blessed Matrona, and a history of the convent from its founding to the present day. 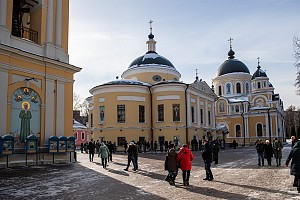