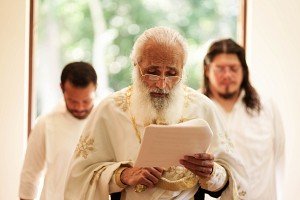 As we all know and have experienced, the pandemic has brought a time of profound upheaval and uncertainty. For the small island of Puerto Rico, this test came at a time when its people were already grappling with the fallout of several other major events: Hurricanes Irma & Maria in 2017 and the earthquakes that hit the south of the island in 2019.

As with so many churches, attendance at services was drastically reduced for the Misión Ortodoxa San Juan Clímaco, one of only two existing Orthodox churches on the island. But with God’s help, observing the safety guidelines of the Diocese, the mission managed to serve Vespers and Divine Liturgy every week since the beginning of the pandemic. At times, only the priest and his matushka were in attendance.

Unexpectedly, several young people approached the mission as inquirers during this time, and catechism became a regular part of Sunday luncheon, held outdoors. By God’s grace, on Saturday, January 16, Samuel Velez and Irving Gonzales (named Gregorio in baptism) were baptized into the Holy Orthodox Church. The next day, Leonel Arenas was baptized, taking the name of Gabriel.

This may seem small in quantity. But for the community in Puerto Rico, it is a miracle. For the mission, bringing two Protestants and one practicing Catholic to Orthodoxy on the island during the pandemic is proof of God’s care and mercy.

We ask our brothers and sisters in the Eastern American Diocese to continue to pray for the missionary work in Puerto Rico. We are eager to continue the work needed to spread here the joyful light of Orthodoxy. 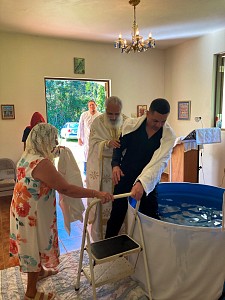