Fort Wayne, IN: Matushka Irina Korolenko reposed in the Lord 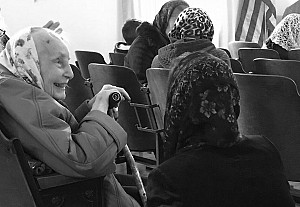 On Tuesday, March 9, Matushka Irina Korolenko, reposed in the Lord, just a few days ahead of her 95th birthday. Matushka Ira was the wife of ever-memorable Priest Andrei Korolenko, at one time rector of Holy Trinity Church in Fort Wayne, IN.

She was blessed by God to receive Holy Communion the evening prior to her repose, and received many visitors in her last hours. She was also blessed to be called by God on the same date on which her own husband reposed in 2011, which is a great miracle. She will rest next to him at Holy Trinity Monastery in Jordanville, NY.

Matushka Ira was born in 1926 in Kiev: "the Mother of all Russian cities," as she joyfully proclaimed! Her early years were fraught with difficulty, famine, and disease, and the loss of her family and friends to Communist persecution and death. She was 20 years old when she evacuated postwar Germany in 1947 and settled with the Russian émigrés in Morocco. Seeing children idling away their spare time, she used what she remembered from her youth to organize a Russian Scout movement there, and led her local chapter for the next seven years. She spent time in Paris briefly in the 1950s, when Saint John (Maximovitch) was there, and she became very serious about her faith. She moved to New York in 1954, where she met the future Fr. Andrei, married, and had three children: Sergei, Basil, and Vladimir. She taught Russian history and the Russian language in New York, and continued that work everywhere she went. She came to Fort Wayne in the 1970s when Andrei pursued an engineering job at ITT Technical Institute. He was ordained to the priesthood after his retirement in the 1980s; together, Fr. Andrei and Matushka Irina supported the Russian community in Fort Wayne and New York both inside and outside of church life. For decades, she remained an active member of St. George Pathfinders of America, and inspired in countless young scouts a love of Russian history.

Surely everyone who knows her fondly remembers her loving concern for others and her true Christian joy, despite any difficulty or suffering. She often relayed all the countless miracles that happened in her lifetime, and was always grateful to God for all of them. She smiled and laughed at many inconveniences or grievances, and showed herself to be a true example of faith and humility.