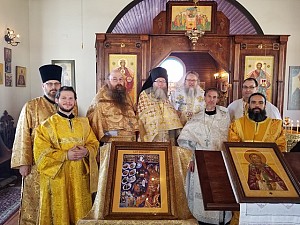 On Friday, March 5, Metropolitan Jonah (Paffhausen) celebrated Divine Liturgy at the Monastery of St. Demetrios of Thessaloniki in Spotsylvania, VA, where, with the blessing of Metropolitan Hilarion of Eastern America & New York, he performed the diaconal ordination of Fr. James Krueger. On Saturday, March 6, His Eminence celebrated Divine Liturgy in St. Herman of Alaska Church in Stafford, VA, where he ordained Fr. James to the priesthood.

On Friday morning, prior to the start of Liturgy, James was tonsured as a reader and ordained as a subdeacon. He was ordained to the diaconate following the Eucharistic Canon. Concelebrating with His Eminence were: monastery cleric Hieromonk Aiden (Keller), Hierodeacon Mark (Sanford; member of the monastery brotherhood and cleric of St. Herman Church), and Deacon Lazarus Sparandera (cleric of St. Herman of Alaska Western Rite Church in Bovina, NY).

The choir on both days was led by Reader Bessarion Grant, and a luncheon was served on both days.

Upon completion of the services, Metropolitan Jonah addressed the gathered faithful and offered words of instruction and encouragement to Fr. James. 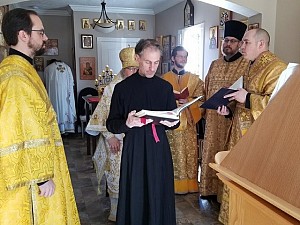