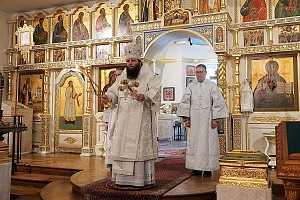 On May 23, the Sunday of the Paralytic, Bishop Nicholas of Manhattan celebrated Divine Liturgy in the Synodal Cathedral of the Sign in New York City, co-served by cathedral dean Archpriest Andrei Sommer and Archpriest Edward Chervinsky and Protodeacon Nicolas Mokhoff (cathedral clerics). Praying in the altar was Archbishop Gabriel of Montreal & Canada. The Synodal choir sang prayerfully under the direction of conductor Vadim S. Gan.

The service was held under the aegis of the wonderworking Kursk Root Icon of the Mother of God, recently returned to the cathedral from the Mid-American Diocese. A multitude of parishioners communed of Christ’s Holy Mysteries.

Upon completion of Liturgy, Bishop Nicholas congratulated those present with the ongoing days of Pascha, noting that "the light from the tomb of the risen Savior always conquers all things."

His Grace spoke further in a sermon on the subject of the feast, in which he said, in part:

"Christ the Savior accomplished a great wonder when He healed the paralyzed man. This happened in Jerusalem near the Sheep Gate where there was a pool, by which gathered many sick and infirm. They waited for the moment when an angel of the Lord would descend from the heavens and trouble the water, which would then receive healing power. Whoever then went first into the water would be healed. There lay there a man paralyzed for 38 years, who had no one to put him into the water. And the Savior approached and asked the man, ‘Wilt thou be made whole?’ And He said further, ‘Rise, take up thy bed, and walk,’ healing him in an instant. This happened on the Sabbath, when the Jews were not permitted to do any work. And the man revealed Who had healed him on the Sabbath. Christ later saw the man and told him, ‘Thou art made whole: sin no more’".

Addressing the faithful, His Grace continued: "We often wish to be healthy, happy, and joyous, and follow every conceivable path in search of the good things and comforts in life. But who seeks the salvation of their soul? And the Lord asks each one of us this eternal question: ‘Wilt thou be made whole?’"

Bishop Nicholas called on parishioners to attend church and, most importantly, to thank God, frequently sanctifying their minds and souls and staying informed regarding Church life.

In light of relaxed municipal health measures, the traditional luncheon was once against held in the cathedral hall for clergy and parishioners. 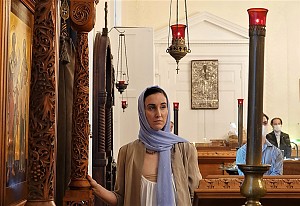