On Monday evening, June 14, the eve of the tenth anniversary of the repose of Archpriest Philip Petrovsky, family and friends of the departed gathered at St. Vladimir Cemetery in Jackson, NJ, for a panihida at the his grave. The panihida was led by Archpriest Serge Ledkovsky (deputy rector of the neighboring St. Vladimir Memorial Church), co-served by Archpriest Serge Lukianov (rector of St. Alexander Nevsky Cathedral in Howell, NJ), Protodeacon Paul Drozdowski (cleric of St. Alexander Nevsky Cathedral) and Deacon Rostislav Wojtenko (cleric of St. Vladimir Memorial Church).

Archpriest Philip Petrovsky was born on November 12, 1946, in Brooklyn, NY. In 1974 he married Tatiana Kozosko. Fr. Philip was ordained to the diaconate by Archbishop Nikon (Rklitsky) on January 25, 1976. On March 9, 1977, the feast of the First and Second Findings of the Head of St. John the Baptist, Fr. Philip was ordained to the priesthood by Metropolitan Philaret (Voznesensky).

Over the years, Fr. Philip faithfully served in many churches of the Eastern American Diocese, most notably in St. Vladimir Memorial Church, where he served as the second priest for many years. Fr. Philip had a burning love for missionary work and dedicated his entire life to spreading the Orthodox Faith. He organized an English-language mission to bring the beauty and splendor of Russian Orthodox services to the English-speaking faithful. In later years, Fr. Philip served as the rector of St. Nicholas Church in Red Bank, NJ and St. George Kuban Cossack Church in Howell. 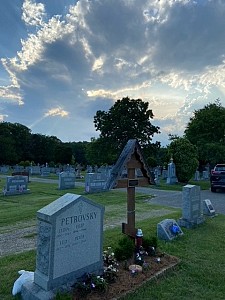