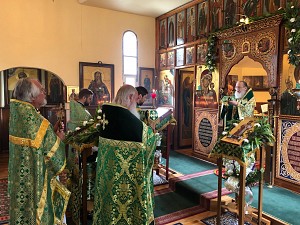 On Friday, July 2, Metropolitan Hilarion of Eastern America & New York paid an archpastoral visit to the Hermitage of the Holy Protection in Buena, NJ, where he celebrated Divine Liturgy in honor of its lesser patronal feast day – that of Venerable Barlaam, Abbot of Khutyn and Wonderworker of Novgorod.

Known also as Holy Protection Skete, the small monastic community, founded in 2015, revived a formerly defunct Kuban Cossack parish deep in South Jersey, complete with a rectory (which now serves as the monastic dormitory), refectory, belfry, and cemetery. The skete is especially important to Metropolitan Hilarion, as he has enrolled himself as a member of the brotherhood – though not its abbot.

At the Little Entrance, Fr. Tikhon was awarded the right to wear the palitsa.

All of the faithful in attendance received Christ's Holy Mysteries.

Upon completion of Liturgy, Metropolitan Hilarion greeted the gathered worshippers, and congratulated Fr. Tikhon on his clerical award, thanking him for his diligent service and work in reviving the skete. In turn, Fr. Tikhon thanked His Eminence for his support and archpastoral prayers, and spoke about the life of Venerable Barlaam of Khutyn, who in his life also worked to establish a great monastery in a once desolate place (the name "Khutyn," where the saint labored, is derived from the Russian word for "meager" or "impoverished"). In this way he credited the First Hierarch for choosing this patron saint, whom the brethren and faithful can now emulate in their labors at the skete.

After the service, a luncheon was served in the refectory, where interaction between the clergy and faithful continued. 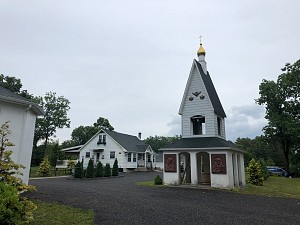