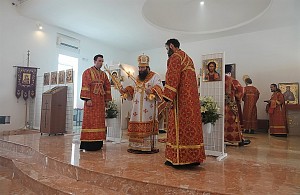 The first hierarchal Liturgy after the start of large-scale renovations in  Holy New Martyrs & Confessors of Russia Church in Brooklyn, NY was celebrated on Sunday, July 4, by Eastern American Diocese vicar Bishop Nicholas of Manhattan. On this day, Orthodox Christians honor all the Saints who have shone forth in the Russian Land, including the Holy New Martyrs & Confessors of Russia.

Renovations in the church began immediately after the feast of the Baptism of the Lord (Theophany). During this time, services were held in the church hall, where the former iconostasis was installed. To date, the floor, walls, and windows have been replaced, and a new boiler and air conditioning system installed.

Now the floor in the temple is covered in a light marble, the ambo has been raised up three steps, the altar has been expanded, two kliroi have been arranged, the altar table and the seven-branched candlestick were replaced, and sacred objects and chandeliers ordered.

The plans include building a baptistery for adults inside the church, replacing the façade, and installing a new cupola and steps.

A carved iconostasis made of natural wood has also been ordered, the icons for which will be painted by a Russian icon painter. After the installation of the iconostasis, the next project will be frescoes.

Services in the renovated church were already held on Palm Sunday, Passion Week, and Pascha. The pandemic forced changes to the schedule of services, so it was decided to combine the patronal feast with the celebration of All Russian Saints, with a hierarchal divine service and the greeting of the Protectress of the Russian Diaspora.

Praying at Liturgy were parishioners and faithful from other churches in New York. Almost all of these received Christ’s Holy Mysteries.

Upon conclusion of Liturgy, Bishop Nicholas greeted those gathered and delivered a sermon, in which he spoke about the life and good deeds of St. John of Shanghai & San Francisco, whose memory the Holy Church had commemorated the day prior. His Grace called on the faithful to follow the example of St. John and do good deeds, to come more often to church, where there is an opportunity to find their place both in their own life and in the life of the Church.

Fr. Serge expressed the hope that the visit of the Mother of God would encourage believers to do good deeds, kindling in their hearts a desire to support this holy place, which has been home to this parish since its founding 20 years ago.

The rector noted the efforts of the parishioners during the renovation of the church, especially Subdeacon Igor Zayets.

A festal meal was organized in the church hall, during which parishioners interacted warmly with the clergy. 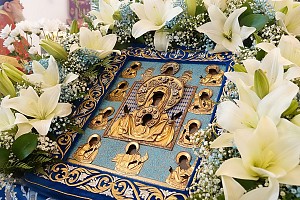