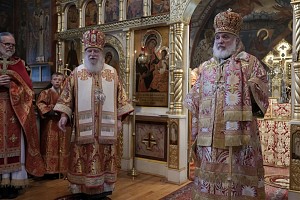 On Monday, July 12, the feast of the Holy Preëminent Apostles Peter and Paul, Eastern American Diocesan vicar and abbot of Holy Trinity Monastery, Bishop Luke of Syracuse celebrated the 40th anniversary of his ordination to the holy priesthood.

Officiating at the All-Night Vigil on Sunday evening and leading the celebration of the Divine Liturgy on Monday morning was Archbishop Gabriel of Montreal & Canada, co-served by Bishop Luke and monastery and visiting clergy.

Upon conclusion of Liturgy, Archbishop Gabriel congratulated Bishop Luke on his jubilee anniversary, highlighting his decades of pastoral service to and love for the Holy Church. He then presented him with an icon of Holy Hieromartyr Vladimir of Kiev. On behalf of the monastery brotherhood, Archimandrite Theophylact (Clapper-DeWell) congratulated their abbot, wishing him good health and prosperity in his archpastoral labors, and then presenting him with a small omophorion belonging to the ever-memorable Metropolitan Laurus (Škurla; +2008).

A bountiful festal luncheon was then offered in the seminary hall, during which many congratulatory toasts were offered on behalf of His Grace. 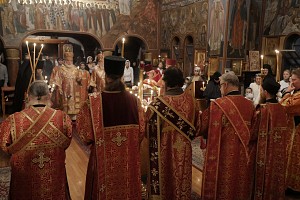