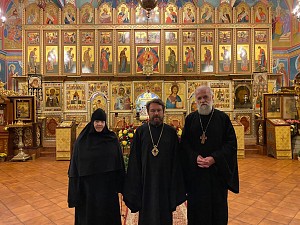 On Wednesday, July 14, Metropolitan Hilarion of Volokolamsk, chairman of the Department of External Church Relations of the Moscow Patriarchate, visited St. John the Baptist Cathedral in Washington, DC. This parish was founded in September of 1949 by the Holy Hierarch John of Shanghai & San Francisco, the Wonderworker.

At the entrance to the church, Metropolitan Hilarion was met by Archpriest Victor Potapov, who has been serving as the rector of the cathedral for four decades. The archpastor noted that he was glad to visit St. John the Baptist Cathedral again, and recalled the divine service that he officiated in this church in 2017.

During their conversation, the rector told the DECR chairman about the youth, educational, and pastoral work being done in the parish.

Metropolitan Hilarion noted Fr. Victor’s participation in the preparation for the restoration of the Canonical Communion of the Moscow Patriarchate and the Russian Church Abroad in 2007, as well as the significance of his missionary work, which began back in the 70s, when he was broadcasting on "Voice of America" radio.

In memory of the meeting, Metropolitan Hilarion presented Fr. Victor with his books Liturgy and The Gospel of Dostoevsky.