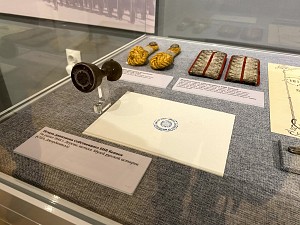 The Russian History Museum at Holy Trinity Monastery in Jordanville, NY, is honored to loan 50 rare objects to Russia’s Tsarskoe Selo Museum-Preserve in St. Petersburg, for a new exhibition on view July 23 – October 18, 2021. "At the Sovereign’s Stirrup: Cavalry Escorts from the 16th Century to Today" presents the history of mounted military units that escorted Russia’s tsars and emperors. A significant part of the exhibition is dedicated to the history of His Imperial Majesty’s Own Escort, the elite Terek and Kuban Cossack guards that served as the emperor’s personal detail from the early 19th century until the February Revolution of 1917.

The Russian History Museum was approached by Dmitrii A. Klochkov, exhibition curator and recently appointed Head of the Military Department of Tsarskoe Selo Museum-Preserve, who wished to borrow unique materials relating to the Imperial Escort. Some of these artifacts and documents had left Russia after the Revolution and Russian Civil War, while others were created by members of the Escort in the diaspora. These objects were saved and preserved abroad by members of the Escort and their descendants, and now form an important part of the Russian History Museum’s holdings. Klochkov worked closely with the Museum’s Executive Director, Michael Perekrestov, to identify and select significant pieces for "At the Sovereign’s Stirrup," which celebrates the 210th anniversary of the Imperial Escort’s formation.

Militaria from the imperial and émigré periods, silver, photographs, and documents from the Russian History Museum are featured in the first major exhibition on the escort of the Russian tsars. The most significant loan from the Museum is undoubtedly the St. George Standard of His Imperial Majesty’s Own Escort. This banner, an exceptional mark of distinction, was awarded by Emperor Alexander II to the Black Sea Cossack Division (later – the Life Guards of the Kuban Cossack Squadrons), a subunit of the Imperial Escort, in 1856. In 1861, it became the standard of the entire Escort. The silk standard is elaborately embroidered in silver thread and bullion. It is accompanied by a silvered finial in the form of an imperial double-headed eagle and enameled cross of the Order of St. George that topped the standard. Another component of the standard loaned to Tsarskoe Selo is a gilded band, originally attached to the standard’s staff, that is engraved with inscriptions enumerating the unit’s military feats.

Another important piece is the Imperial Escort’s "farewell cup." On the eve of their departure to the Caucasus following the February Revolution of 1917, all the officers of the Escort who were at Tsarskoe Selo visited their Assembly for the last time. At this farewell dinner, the place settings were unusual. All of the silver usually presented on the table at officers’ banquets was missing from the table. It was packed away, together with the rest of the property of the Tsarskoe Selo Officers’ Assembly. In its place, each officer found a single "farewell cup," featuring engraved signatures of all his fellow officers. The "farewell cup" in the Russian History Museum’s collection belonged to Viktor Erastovich Zborovskii, who became the Guard Division’s commander during the ensuing Civil War.

The traditions of the Escort continued on in exile. One of the loaned artifacts is a gilded metal and steel link bracelet made in the diaspora to commemorate the 125th anniversary of the Escort in 1936. A similar bracelet with the Escort’s emblem, purportedly designed by Empress Alexandra Feodorovna, had been made in 1911, when the Escort celebrated its 100th anniversary. These diamond-studded bracelets, presented by the Escort’s commander to the Empress and Grand Duchesses in 1911, served as the inspiration for the 1936 version.

"It is moving and exciting to be a part of this exhibition. Some of these objects, such as the Imperial Escort’s standard, are returning to Tsarskoe Selo for the first time since 1917," said Michael Perekrestov, Executive Director of the Russian History Museum. "I am particularly pleased that, despite significant challenges presented by the pandemic, we continue to partner with international museums and share our treasures with a global audience. We are thrilled to present these unique artifacts with museum-goers in Russia."

In recent years, the Russian History Museum has loaned objects to several international venues, including the Science Museum in London, the Manege in Moscow, and the Ikonenmuseum in Frankfurt. Driven by its mission to share its distinctive collection with the public to educate and inspire, the Russian History Museum continues its track record of national and international museum loans by partnering with Tsarskoe Selo.

The exhibition is accompanied by website, a richly illustrated catalogue, and documentary film. "We provided high-quality scans of materials in instances when photographs and documents from our collection were too fragile to physically transport to Tsarskoe Selo for the exhibition," explained Perekrestov. Reproductions of these materials are included in the exhibition, as well as the catalog and documentary. "We have a number of important objects which fill in gaps in the history of the Imperial Escort," noted Nick Nicholson, the Museum’s Curator. "Some of the objects on loan from the Russian History Museum are on public display for the first time."

The exhibition is on view at the Cameron Gallery, an elegant, colonnaded building commissioned by Catherine the Great. Designed by the architect Charles Cameron and completed in 1787, the Gallery situated perpendicular to the Catherine Palace. 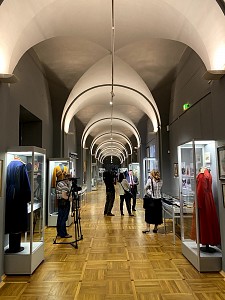