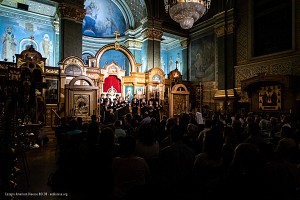 Cathedral dean Abbot Nicodemus (Balyasnikov) and Priest Mark Rashkov welcomed the attendees to the cathedral and spoke on the significance of the date the concert was being held – the day of the martyric death of the Holy Hieromartyr Alexander (Hotovitsky; +1937), first rector of the Patriarchal cathedral.

The choir, under the direction of John Arlievsky, delighted the guests with selections from pre-revolutionary Russia, such as Pavel Chesnokov and Sergei Rachmaninoff, to the modern day compositions of Arvo Pärt and Alfred Schnittke. The concert was sponsored by the Patriarch Tikhon Russian-American Music Institute (PaTRAM). With a thunderous round of applause, the organizers thanked all those gathered for their support.

A reception was then held in the cathedral hall, where interaction continued.

The choir will be singing the divine services along with the Synodal Cathedral Choir for the 800th Anniversary of the birth of St. Alexander Nevsky in Howell, NJ this coming Sunday, September 12.

To learn more about the activities of Osanna, visit their Facebook page. 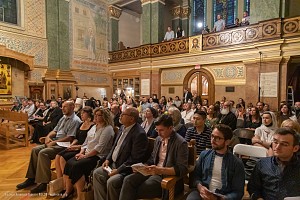