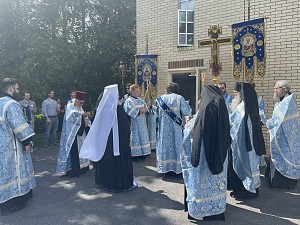 On August 31, the Holy Church celebrates the memory of the Holy Martyrs Florus and Laurus. This was the namesday of the ever-memorable Metropolitan Laurus (Škurla; +2008) and Archimandrite Flor (Vanko; +2012). Metropolitan Laurus was abbot of Holy Trinity Monastery for 32 years; he and Fr. Flor were among the group of monastics who came from St. Job of Pochaev Monastery in Czechoslovakia and immigrated to the United States after World War II to join the brotherhood already established here by Archimandrite Panteleimon (Nizhnik; +1984).

After Divine Liturgy and a luncheon in the monastic refectory, Metropolitan Hilarion of Eastern America & New York, along with monastery clergy, served a panihida for the repose of both much-beloved fathers in our Faith. May their memory be eternal for their countless struggles for the sake of the Church and the monastery! 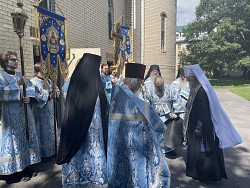