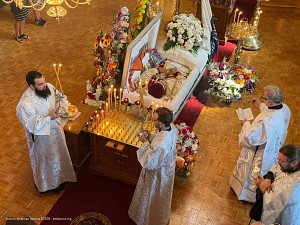 On Thursday, September 30, clergy and parishioners gathered in St. Alexander Nevsky Cathedral in Howell, NJ to bid farewell to their longtime cleric, Protodeacon Nicholas Lukianov, who reposed in the Lord on September 27.

Early in the morning, Divine Liturgy was celebrated in honor of the feast of the Holy Martyrs Faith, Hope, Charity & Sophia by parish rector Archpriest Serge Lukianov.

After the kontakion during the canon, Fr. Nicholas’ brother Fr. Serge delivered a eulogy, highlighting the sacrificial life Fr. Nicholas lived, despite his many ailments. He was able to expound on how integral the departed was to the life of St. Alexander Nevsky parish: as a cleric – leading the faithful in prayer during the divine services; an engineer – supervising various projects around the parish complex; as a benefactor – to the many charitable funds established to help the needy; as well as a husband and father.

Upon conclusion of the service, Archbishop Gabriel relayed the condolences of the First Hierarch of the Russian Church Abroad, Metropolitan Hilarion of Eastern America & New York, as well as his own remarks of support and love to the family of the newly reposed.

The many faithful were then able to give their last kiss to Protodeacon Nicholas, who was interred in St. Vladimir Cemetery in Jackson.

A memorial repast was held in the cathedral hall, where more fond remembrances of Fr. Nicholas were shared. 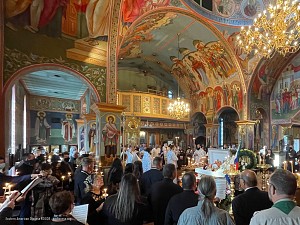