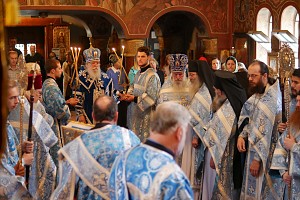 On October 1/14, the Orthodox Church celebrates the feast of the Protection of the Most Holy Theotokos. It is especially and solemnly celebrated in the Russian Orthodox Church. This is due to the fact that the pious Russian people regard the events associated with the feast as the beginning of their salvation, in that the pagans who inhabited what is now Russia and Ukraine were humbled by God in the miracle of the appearance of the Theotokos in the church in Constantinople, showing her intercession before her Son and Lord, so that the Christians would be saved and the heathen defeated, when the pagans were set to conquer the capital city of the Byzantine Empire.

On Wednesday the 13th and Thursday the 14th of October, Eastern American Diocesan vicar Bishop Luke of Syracuse officiated the festal divine services in Holy Trinity Monastery, of which His Grace is abbot, co-served by monastery and visiting clergy.

One of the most precious relics housed in the monastery’s Holy Trinity cathedral is a piece of the cincture, or girdle, of the Mother of God, which is contained in the icon of the Protection and which is brought out and placed in the middle of the church for veneration by the faithful.

On this day, it is a monastery tradition to commemorate all of the past and present choir directors, as well as the present-day singers in the choir. May the Lord, through the prayers of His Most Blessed Mother, inspire them to continue leading the monastics and faithful in prayer. 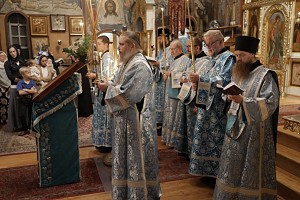