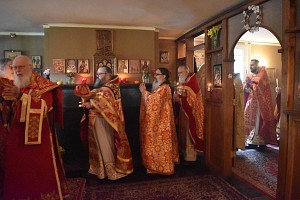 On Friday the 15th and Saturday the 16th of October, the Brotherhood of St. Dionysios in St. James, NY, celebrated its fourth annual patronal feast day – the feast of the Holy Hieromartyr Dionysios the Areopagite.

Before Great Vespers on Friday evening, the novice Paul Scott was tonsured as the Rassaphore Monk Elias. The abbot of the monastery, Archimandrite Maximos (Weimar), instructed the newly tonsured monk and the rest of the brotherhood to be mindful of fasting, obedience, chastity, stability, and mental prayer as pillars of the monastic life.

In his homily, Fr. Maximos preached against the dangers of idolatry as representing the very opposite of belief in God, and of how the idols of the modern world are hidden in the mind and in the heart, and of how they make us ill. He explained how pagans worshiped their false gods from fear, but that we need no longer fear such dark influences through the power of Christ and His Resurrection, and he held up St. Dionysios as a man who recognized this truth as he listened to St. Paul’s powerful message on Mars Hill.

Upon conclusion of Liturgy, Archpriest Alexandre Antchoutine (dean of New York City & Long Island) arrived to warmly greet and congratulate the brotherhood, and bestowed upon the abbot gifts: an icon of the Protection of the Theotokos, finely painted on Mount Athos, as well as a jeweled pectoral cross. Then, as representatives of the brotherhood, Frs. Silouan and Parthenios presented Fr. Maximos with a wooden reliquary, beautifully carved with icons, as a gesture of their appreciation for his many years of labor undertaking the burden of leadership on behalf of the brotherhood.

After the dismissal, those in attendance made their way out to the tents, where a festal luncheon was prepared by the parish sisterhood. The ensuing festivities were favored with sunny weather and warm fellowship.

The brotherhood extended its gratitude to all those whose labor, support, and presence made the celebration a success.